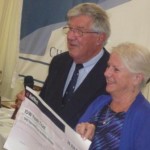 Now in its 8th year the Cowes Classics Week is hosted and organised by the Royal London Yacht Club.
Almost 150 boats were racing and classes represented included the Bembridge One Designs, Darings, Flying Fifteens, Old Gaffers and Solent Sunbeams. Meanwhile, the X One Designs (XOD) had a massive turnout of 60 yachts.

One competitor told us that the XOD class was recognised as the ‘wet class’-“You know before you start that you are going to get wet”, he said. On the day we spoke with him all the XOD fleet had experienced strong winds especially around noon with waves crashing into the boats on occasions. However, conditions suited the XODs perfectly on their committee boat windward /leeward courses and the steady winds of around 16 knots provided some lively sailing. This fleet goes from strength to strength, with entries up by 10 from last year.

The Solent Sunbeams, with a fleet that makes its annual crossing from Itchenor Sailing Club to the event had two races on Tuesday with Cathy Burnie’s Fleury winning both and by the end of the week Fleury had an almost clean sweep of wins from their 8 races.
Day two of the points series for the majority of the Cowes Classics Week classes got underway on Wednesday in another good breeze. Once again it was down to the four committee boats spread across the north shore of the Solent to the east of Cowes to set windward/ leeward courses. There were two races for each class, with the exception of the Daring class which managed to get in three. In the 6 metres Fenton Burger had two wins in his vintage 1926 yacht Sioma whilst David Hopkins’ gaffer Chough, a one-off design built in 1927, won both races in that class.

Wednesday’s racing was sponsored by Haines Boatyard, Itchenor. They have supported all eight editions of this event and Ryan Rudd, an employee of the yard for 17 years said that he had been involved in a number of repair and restoration jobs involving these classic boats. Ryan presented the prizes on Wednesday on behalf of Haines Boatyard.

Other classic yachts taking part in the regatta and worth a mention include: In the Classics Red fleet, for the highest rated yachts, a distinguished collection of Nicholson 32s, all built in the early 1960s, cruiser, Quailo III, with a distinguished history including membership of the 1973 Admiral’s Cup team and Barry Dunning and Bob Fisher’s 1896 Solent One Design Rosenn, designed and built by White’s. In the Classic White division the owners boast that no boat in the fleet is built later than 1913.

On Thursday the Seaview Mermaids paid a visit to the event, sailing the short distance to Cowes from their home base at Seaview Yacht Club. Each has their distinctive and exclusive bright coloured hull and the fleet has been racing in the Solent for over 100 years. All 13 yachts of the current fleet made the start line.

All through the week competitors were encouraged to donate to the Island’s Youth Trust or to purchase raffle tickets. Prizes in the raffle included tickets for Bestival or meals at the Royal Hotel, Ventnor. Eileen Monks OBE from the Youth Trust spoke on the Trust’s work at the evening reception on the opening day telling the guests that The Youth Trust is a charitable independent and professional organisation offering counselling, advice, information and support services to young people aged 25 and under on the Isle of Wight and, in some cases their parents or carers. The Youth Trust has been working on the Isle of Wight for over 30 years and has made a positive input to the wellbeing of people locally. Eileen was also present to receive a cheque for £1,500, generously donated by the competitors, at the final prize giving. Eileen thanked all those who had given money to the trust and wished everyone good sailing in the future.

At the prizegiving Charles Stanley were thanked for their title sponsorship as were supporting sponsors Island company Hudson Wight, Harken, Haines Boatyard, Winkworth, Cowes Harbour Commission, nms marketing, Kendalls Fine Art of Cowes, The Yachting Studio, and Classic Boat Magazine.
Trophies and awards were presented to winners and runners-up in all classes and of local interest was the presentation of the Queen Victoria Cup to the crew of Cowes based Mike Harrison’s Jiminy Cricket a Contessa 26. Mike and Barbara Harrison from Cowes and Alan Swaby from East Cowes form the crew of this Contessa 26, a class celebrating 50 years this year. Mike said that he hoped more Contessa 26s would be taking part in the Charles Stanley Cowes Classics Week in2016.