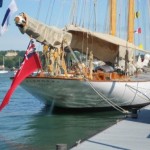 Cowes will see a number of Classic Yachts arriving over the next few weeks. With two regattas being held during the same week this year, both the Charles Stanley Cowes Classics Week and the Panerai Regatta will enable those keen on traditional boats to see some of the World’s best. Also a number of unique and traditional yachts will be at Cowes for the RYS International Regatta some having just sailed the Atlantic to be there.
Organisers of the Charles Stanley Cowes Classics Week say that they are delighted that Charles Stanley is continuing their headline sponsorship. As before, their involvement will see Charles Stanley employees competing at the event again and The Royal London Yacht Club hosting the event.
There are always exciting developments surrounding Cowes Classics Week, and this year is no different. Several new classes have been interested in participating this year and this has enabled the organisers to re-introduce the Classic Dayboat Class that has been missing from the past couple of regattas and the 6mRs will be attending again. The largest class will be the XODs.
All Classic Yacht Classes will split into 3 fleets – Red, White & Blue, including a non-spinnaker fleet which will be set courses without dead-downwind legs and The Old Gaffers will probably race on the same track as this new fleet.

Panerai British Classic Week, now in its 12th year, is the annual Regatta of the British Classic Yacht Club and not only attracts entries from these shores but also regularly from Europe or further afield. This regatta is perfect for classic boat enthusiasts to enjoy some fantastic racing and to get together with like-minded individuals with the same appreciation of owning a classic boat.
Usually the boats are moored in Cowes Yacht Haven where they can be viewed up close as well as forming a splendid sight when racing. For the 2015 regatta their looks to be an anticipated bigger entry and racing is once again being organised by the Royal Yacht Squadron. Racing will be a six race series plus a stand-alone Around the Island Race sponsored by EFG International on Monday 20th July, following the original clockwise course of the first America’s Cup.
Entries already include: ‘Damian B’, ‘Ragdoll’, the Herreschoff schooner ‘Eleonora’, Fife cutter ‘Mariquita’, the Sparkman & Stephens designed ‘Opposition’, Fife gaff cutter ‘Jap’, Laurent Giles sloops ‘Whooper’ and ‘Cetewayo’, Spirit 52 ‘Flight of Ufford’ and many more.
On 25th July at 11am there will be a Parade of Sail from the RYS. View these classic boats from Cowes Parade.

The RYS Bicentenary Regatta will feature racing for a broad mixture of boats, from modern 23foot J/70 speedsters to majestic 130foot J Class boats, in an amazing celebration of 200 years of yacht racing.
An IRC fleet will include both vintage classics and modern cutting-edge grand prix race yachts. Entries include the mighty 120ft Briand designed sloop ‘Bristolian’, mini-maxi ‘Jethou’, Ker 46 ‘Tonnere of Breskens’, Elan 40 ‘Flair’, TP 52 ‘Gladiator’, and Grand Soleil 43 ‘Quokka’, which will line up alongside historic legends such as the 48ft ‘Tomahawk’ built in 1938 and 52ft ‘Dorade’, built in 1929.
As well as being an entry in the Panerai regatta the schooner ‘Eleonora’ (160ft) will be taking part in the RYS event. Two 8 metre yachts ‘Helen’ and ‘Enchantement’ built 1936 and 1923 respectively will also be amongst competitors and the event has been a magnet for the most immaculate and competitive classics in Europe and beyond. Several, including ‘Dorade’ will have raced across the Atlantic from Newport, Rhode Island in the TR2015 prior to taking part in this regatta.
In celebration of the 200 years of the RYS organisers hope to have a number of the famous J Class yachts on their starting lines. Here is a brief history of the ’Js’:
The J Class has its roots in the oldest sporting race in the world, The America’s Cup. In 1929 Sir Thomas Lipton issued his fifth challenge to the Americans for the America’s Cup and commissioned the build of the first J Class Yacht, the 120’ ‘Shamrock V’. In answer to Lipton’s challenge of 1929 the Americans designed four J-Class yachts as possible defenders, ‘Enterprise’, ‘Whirlwind,’ ‘Yankee’ and ‘Weetamoe’ and these were launched within a month of each other, signifying the start of a new era in design evolution and racing.
Five of these stunning J Class yachts are expected to take part in the RYS Bicentenary, and if all goes to plan, it will be the first time that the RYS will have welcomed that number to the Solent for nearly 80 years.
This event will also include a Round the Island Race.