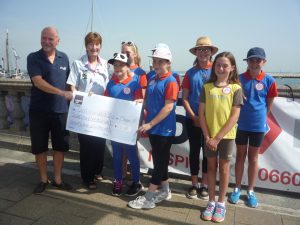 Girlguiding Isle of Wight has been presented with a cheque for £772 by WightAid.

This presentation was made to members of Girlguiding IW by Brian Marriott a Trustee of WightAid during Lendy Cowes Week. The £772 was raised by those taking part in the Red Funnel Bicycle Island Challenge during June when Girlguiding IW was selected by Bicycle Island as their charity to support. 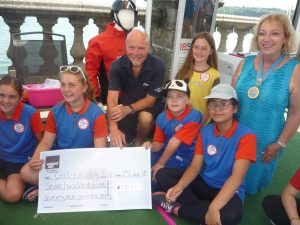 Whilst the presentation was being made there was a surprise for the Girlguiding members with a visit from the Island’s High Sheriff Gioia Minghella-Giddens.

During June the challenge was to ride the Newport-Cowes cycleway as many times as possible and register your endeavours on the Bicycle Island App. The total reached was a record-breaking 2859km raising the £772 total.

Since its formation, some eighteen months ago, WightAid has granted £200,000 to 62 groups and charities with support coming from local businesses. It is a way that Island businesses can support local charities which in turn benefits the Island’s community.

It was a busy Lendy Cowes Week Ladies Day for the Girlguiding members as after the cheque presentation they were undertaking STEM challenges set by the 1851 Trust on their stand on Cowes Parade. 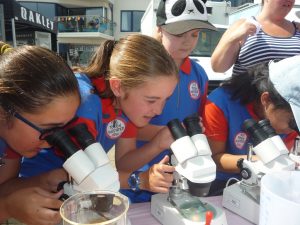