Although this year’s Charles Stanley Direct Cowes Classics Week was reduced to three days sailing because of weather conditions, those three days saw some exciting and challenging racing for the competitors.

Cowes Sea Cadets (TS Osborne) was the chosen charity of the event. With cadets helping with the running of the regatta they were rewarded with a donation of £1,505 at the prizegiving. This had been collected during the week or given by some competitors when entering with the enticement of a magnum of Champagne as a prize. This was won by Alan Perry.

Officer in charge Jacky de Bruyne told the audience at the prizegiving that Cowes Sea Cadets was formed in 1922 at Osborne House. Later in its history the unit moved across the river and recently had a new clubhouse built costing some £500K, some of which had come from grant money. Over the years some 5,000 cadets have been members and at present there are 30 members.

Back to the sailing: The start of the week on Monday witnessed a huge mixture of weather with light airs and saw winds constantly shifting which presented a mixture of fortunes across the competing fleets.

Andrew Pearson’s wooden 10 metre yacht Bojar, which is 80 years old this year, was winner of ‘Classic Yacht Red 1’ class, whilst wins in some of the other classes went to SCOD Adelie in the ‘Green’ class, Nordic Folkboat The Otter, in the Folkboat class and Sunmaid V in the ‘Red II’ class.

Monday was due to be the Flying Fifteens’ 70th anniversary race. This Uffa Fox designed keelboat, which first appeared in 1947 saw a 28-strong class but with decreasing wind which left the fleet struggling on the long downwind leg against the tide, one by one decisions were made to retire. However, the day still needed to be celebrated so the anniversary trophy, the Queen Victoria Jubilee Cup, was awarded, with unanimous approval, to the South African crew, Alexander Campbell and Jeremy Knek, who later in the week, at the prizegiving, were given the award for the crew who had travelled the furthest.

Perfect conditions provided spectacular racing on the second day of the regatta- Henri Lloyd Race Day- with 12 to 14 knots of breeze blowing steadily from the East. Competition was keen to win the overall cup for the day, the perpetual Henri Lloyd Trophy donated by Henri Strezlecki, the late founder of the clothing company, 20 years ago. In the end, the win went to Martin Jones and his crew on Betty in the fiercely competitive Solent Sunbeam fleet.

A double winner on the committee boat courses on Tuesday was John Corby on Doublet, taking two firsts in the 14 strong Daring fleet. John rescued Doublet from a local yard for just £10 before going on to completely restore her two years ago.

Nordic Folkboat The Otter, built in 2001 but designed way back in 1941, remained unbeatable amongst the Nordic and International Folkboats. Owner Claire Locke, High Sheriff for the Island a few years ago, was able to see off Ado Jardine in Tak who had to settle for second place.

The Victory class sailed across the Solent on Wednesday from their Portsmouth-based Victory Class Sailing Club which was established in 1934, the same year that the first yachts were built. Designed by Alfred Westmacott, six boats enjoyed three windward leeward courses with wins going, one each, to three boats Ziva, Zarena and Zelia but top slot on points went to Mark Dennington’s Ziva

On the same circuit, close to the Island shore, the Bembridge One Designs, another Solent class, also raced tight courses.  All the owners in the class periodically vote to collectively make major upgrades to keep their boats identical. The BODs were built between 1933 and 1935, and have since been restored and then re-decked in 1989.

Taking part in the ‘Blue Fleet’ was local sailor Andrew Hitt in his Plymouth Hooker Spinaway X. Andrew said that he had had a good regatta even though it was shortened due to the weather.

Racing on days 4 and 5 of the regatta had to be cancelled due to weather conditions but there were plenty of winners across the fleets, picking up a large collection of historic silverware and other prizes at the overall prizegiving on Friday.

Murdoch McKillop’s Saskia was the winning yacht amongst the four majestic 8-metres that competed while John Corby took first place in the Daring Class, also claiming the Metre Regatta Trophy.  Racing on the same circuit were the Solent Sunbeams, won by Martin Jones in Betty. Of the eight Bembridge One Designs, BOD8, sailed by James Rowe emerged victorious. The mixed fleets of Classic Cruisers saw wins for S&S 43 Firebrand, built in 1964 in ‘Red 1’ class and Lawrence Wride’s 1967-built Sunmaid V in ‘Red 2’. Mike Harrison’s 1965 Contessa 26 Jiminy Cricket won Blue while Richard Hargreaves’ Twister Sea Urchin took victory in Green.  Claire Locke, helming her Folkboat The Otter, was the winner of her class.

Taking the ‘Old Gaffers’ award was Brian Corbett from Rochester who was competing in his sixth Cowes Classics Week. His boat ‘Winifred’ built 20 years ago, is an exact replica of the 1892 design of ‘Wee Winn’ built for Winifred Sutton. Brian’s ‘Winifred’ also won the award for the best- looking vessel with the boat which he named after Winifred Sutton. At this regatta Brian had David Hopkins, a twice winner of the Old Gaffers Award, as his helm. 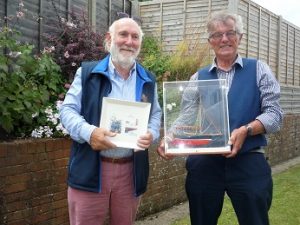 A regular competitor at Yarmouth Old Gaffers, Brian is hoping to bring ‘Bloodhound’ to the 2018 Cowes Classics Week and perhaps for a longer stay in Cowes. Having been given provisional approval from the Royal Yacht Britannia Trust in Leith, its usual home, ‘Bloodhound’ could return to Cowes where crewed by HRH Prince Phillip and Uffa Fox she raced in Cowes Week as well as being used to teach the royal children to sail. To undertake this project fundraising and sponsorship will be needed.

Overall Winner of the 10th Charles Stanley Direct Cowes Classics Week put his success down to a bit of practice and a tightly competitive fleet. Mike Wigmore and his crew brought his Swallow Gwaihir across the Solent from Itchenor.

A special seamanship award was presented to Doctor Steph Brown, who was crewing on Flying Fifteen Fram Freyr, holding on to second position in one race, she witnessed a nearby collision between a Dragon and Flying Fifteen. Giving up her place in the race she went to the aid of a concussed crew who was subsequently taken to hospital and given 24 stitches in his head.

Committee Boats are usually used at this regatta and other regattas sailed out of Cowes. ‘Cowes United’ is a new catamaran Committee Boat which was launched in May this year. It can be used by any of the 6 Cowes yacht clubs which together form Cowes Combined Clubs (Royal London, Royal Ocean Racing Club, Royal Thames, Royal Yacht Squadron, Island Sailing Club and Cowes Corinthian) can use the boat when required. It was certainly well used in this regatta.