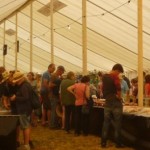 With warm and sunny weather at the beginning of August Chale Show had good visitor numbers and there was certainly a lot going on to entertain the crowd.
Long queues for the climbing tower and to get a signed poster from stunt legend Jez Avery showed where the interest is for some young people but with something to interest all age groups the organisers of Chale Show seem to have the correct format to suit all tastes. 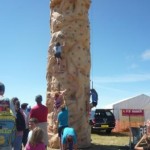 Talking of tastes there were plenty to try and buy in the Farmers’ Market Marquee and the WI as usual had a good selection of goodies including of course the famous jams.
In the main arena entertainment from Jez Avery, Stampede Stunt Company and others held the crowd and some members of the public were keen to join in making it even more fun for some families. Jez performed on 4 wheels, 2 wheels and even no wheels during his arena show whilst the Stampede Stunt Company performed a brand new action packed stunt based on ‘Gulliver’s Carnival’. 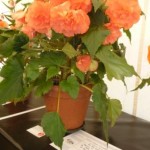 With an enormous marquee to fill with exhibits organisers might wonder if this can be achieved but with the weather this year not being extreme there were certainly some good examples of fruit, vegetables and flowers. Cookery classes showed some good examples of home baking and some entries in the floral art classes showed that entrants had thought long and hard about content. How do you display ‘Fire’ other than in a Fire Basket!
Photography classes were well subscribed and the entries from the schools and colleges showed all the hard work put in by pupils and staff. 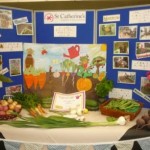 Earl Mountbatten Hospice supported the music stage as well as having a ‘shop’ and dozens of other businesses, organisations and charities had stands around the show field.

On the BATs Bike and Trike stand, Marghanita Allen, a member of the BATS motorcycle club, took part in the Macmillan ‘Brave the Shave’ scheme by having her long hair shaved off. Undertaking the task of cutting off Marghanita’s plaits was fellow biker Carol Weeks with Lexi Skeldon and Marghanita’s husband Dave undertaking the final clipping. As well as supporting Macmillan Marghanita, a leader with Bay Guides, donated her long hair to the Little Princess Trust which makes wigs for children who have had hair loss through illness. For more details of Marghanita’s ‘Brave the Shave’ see Island Guiding News.

Chale Sports and Garden Show started in 1920 and over the years the shows were financed by donations. In 1927 there were over 200 subscriptions amounting to 39 pounds 3 shillings and 10 pence. Originally there were classes for fruit, vegetables and flowers but classes were gradually added including children’s classes and egg classes by the 1950’s with photographic and art classes added in recent years.

Up to the 1950’s the show was held on a Thursday afternoon, as this was early closing day in Chale and some other towns on the Island including Newport. The first 2 day show (Saturday and Sunday) was held in 1976 to celebrate the Silver Jubilee of HM the Queen and in 1978 became the normal arrangement. This same year saw a record number of exhibits – 925. This record stood until 2006 but numbers have continued to climb to last year’s amazing total of 1442.
Venue for the show has changed several times until, in 1998, it moved to the newly established recreation ground where there was space to book larger and more spectacular arena attractions and therefore the show grew in popularity to become an Island wide show.