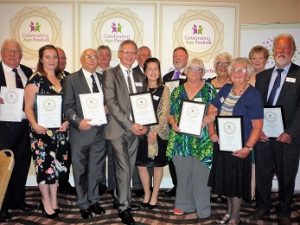 Emma Lincoln from Age UK/IW welcomed everyone to the Awards Ceremony and introduced John Hannam who acted as Master of Ceremonies for the evening. John thanked sponsors and all the organisers especially Emma Lincoln and Hayley Baxter and the team at Age UK IW for planning the event which recognises voluntary work undertaken by older people.

Isle of Wight High Sheriff, Ben Rouse gave the opening address. He mentioned it was the voluntary sector – the unsung heroes – who keep the Island running and said that this Island is the first rural area to receive the accolade of an Age Friendly Area, which is awarded by the World Health Organisation.

Age Friendly Entrepreneur – supported by IW Chamber of Commerce. People over 50 who have made a contribution to Island business.

Angel Radio IW. Founded in 2001 and run by volunteers this radio station broadcasts on 91.5FM playing music covering 1900-1969 and information.

Age Friendly Team – supported by the Co-operative Stores. A Group of older adults who worked together to do something outstanding.

IW Citizens Advice. Manned by some 30 volunteers who field a myriad of problems from the public. Counsellors experience a wonderful feeling when they can solve a problem for someone else.

Age Friendly Volunteer – supported by Red Funnel. Someone who devoted time to volunteering and helping others.

Doreen Britton described herself as a cog in the wheel and dedicated her award to the other volunteers at St. Mary’s Hospital where she has spent twenty years volunteering.

Age Friendly Arm in Arm –  supported by Southern Housing Group An older adult or group of people, young and old, who work together across generations- bridging the gap between young and older people.

Age Friendly Challenge of the Year – supported by Sainsbury’s An older person who overcame a serious challenge and showed courage and determination to inspire others.

Shane Randell. Despite suffering disability himself helps others at Aspire, Ryde and was instrumental in setting up Ryde’s, ‘Men in Sheds’ which now has around 100 members.

Age Friendly Contribution to the community – supported by Southern Vectis Someone over 50 who has devoted their time and effort to changing the lives of others and has impacted the community in a significant way.

John Berry. A voluntary community bus driver in Gurnard who has undertaken some 680 trips. He supports the older residents without transport, describing the passengers as his friends. John also has a supply of dog biscuits for canine passengers!

Age Friendly Active Person – supported by Tesco Someone over 50 who continues to be dedicated to and passionate about sport or who has achieved great things by crossing the finish line in a physical activity.

Fred Isaac. A trampoline coach and founder member of Wight Flyers 40 years ago he continues supporting young people. He has accompanied teams to regional and national events and said that he was happy to still stand up and participate at his age!

Age Friendly Impact – supported by Learning Links An older person who is selflessly making a difference to other peoples’ lives and who has generally impacted the Island in a positive way over the years.

June Ring. Over time and now in her late seventies June is an active volunteer co-ordinating Yarmouth Coffee Mornings, volunteering at The John Cheverton Centre, (EMH) and at St. Mary’s Hospital. Along with her late husband she set up the Island branch of Wessex Cancer Trust and in tandem with IW Fire & Rescue Service has raised around £250K.

As well as the Awards, Helen Lewis from Age UK/IW presented highlights of the Celebrating Age Festival.