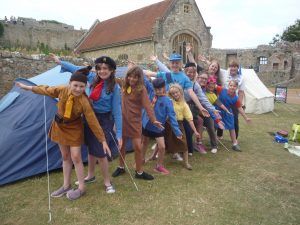 Earlier this year Guides and Brownies from the 1st Carisbrooke Units wrote letters inviting past members to help them celebrate 100 years of the units.

Several past members replied to the letters and recently some Guides and Brownies have been out and about undertaking interviews with some of the past members. These recordings form part of an oral history project in conjunction with Carisbrooke Castle Museum, which was founded by Princess Beatrice, and form part of a special Girlguiding exhibition which has been staged at the museum and will remain throughout the Summer.

A fashion show of uniforms was well received, as were displays, a pebble hunt competition and a camp-fire singalong and everyone enjoyed a slice of Birthday Cake to celebrate the 100 years.
Guide Holly Avey said, “Today has been fun and I really enjoyed doing the interviews and finding out about Brownies and Guides in the past.”

All the ‘100years’ events were organised by a team of Guide and Brownie Leaders.