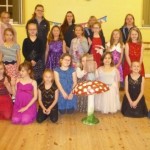 1st Carisbrooke Brownies has reached a special milestone this year with their 95th Birthday!

Along with the 1st Carisbrooke Guide Unit both units were originally registered in November 1919 and later became 1st Carisbrooke (Princess Beatrice’s own) Company and Pack. They were some of the first units on the Island and are now two of the few units which have had active membership of Girlguiding over the years without a break.

For a unit which has spanned nine and a half decades 1st Carisbrooke Brownies has welcomed hundreds of girls, who have participated in various guiding activities and formed friendships. Over the years the pack has witnessed many changes with alterations to the Brownie Programme, Promise and uniform.

To mark this special anniversary 1st Carisbrooke Brownies celebrated with a Birthday Cake, fun and games and shared memories of past fun and activities. This Birthday Party was held on Wednesday 19th November in Carisbrooke. All the Brownies enjoyed seeing a slide show of Carisbrooke Brownies and Guides from previous decades and were thrilled to see that in a photograph taken about 1919 the Brownies were gathered around the Brownie symbol of a toadstool. Of even more interest to the girls was that the same toadstool is still in use today and all the Brownies and their leaders gathered around it for the 2014 photograph. 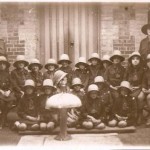 This year all the Brownies have been celebrating 100 years of Brownies nationally and under the title of BIG BROWNIE BIRTHDAY most of the local girls have enjoyed three special events as well as unit events.

On the Island the three special events were a Masked Ball held in January, Star Quest held at IW Steam Railway in June and Sandcastles and more held on Appley Beach at the end of September.