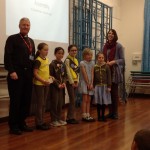 The Brownies who all attend Niton Primary School came up with the idea to help the village fundraiser and organised every part of the sale to make it a very lucrative 20 minutes- raising a staggering £147!

The cheque was presented at a school assembly recently to Revd. Nigel Porter, who was thrilled with the girls’ hard work and community spirit. He also thanked everyone at the school for buying the delicious cakes on the day and helping to raise such a large amount.