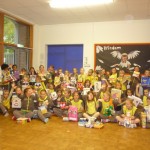 Dozens of Brownies from the Farringford Section of Girlguiding IW, which covers the Newport area and West Wight, recently enjoyed an afternoon which was ‘Out of this World’.
Staged at Carisbrooke C of E Primary School this event saw all the Brownies and their Guiders learning about the Planets of the Solar System and would-be aliens in a fun way. Two leaders Alice Ball and Harriet Townsend dressed as space-men in silver costumes which added to the ‘Out of This World’ experience.

All the girls made their own version of an alien from clean scrap materials which would normally be deposited in the recycling bin. These included CDs, wrapping paper, off-cuts of fabric and washed plastic bottles. These creations were very diverse and there were some outstanding designs from perhaps would-be designers or engineers of the future. 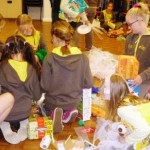 A selection of games and wide-games were staged outside with each base named after a Planet and included team and individual activities. After each Planet had been visited the Brownies gained an ‘Out of this World’ reward. 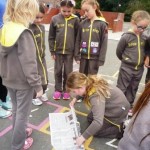 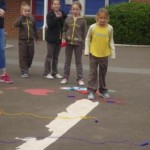 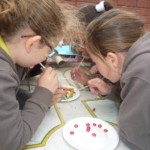 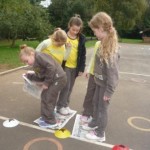 Rachael Woods, Section Commissioner said, “Most of the Brownies in this Section have come together for these activities. It gives the girls a chance to meet Brownies from a different town, make new friends and learn that the Girlguiding world extends further than their own unit. ‘Out of this World’ gave them all the chance to be creative and learn about the Universe as well as having fun in newly made friendships. Making the aliens also showed them how to recycle materials and look after the environment.”