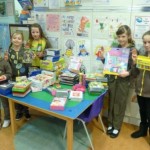 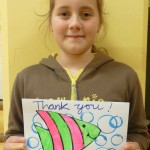 As part of the 100th Big Brownie Birthday celebrations a group of the Brownies chose to hold a donation event for the playroom area of the Children’s Ward at St. Mary’s Hospital.

This playroom caters for sick children and young people aged from 0 – 18yrs and the donated gifts could help to keep the younger patients occupied whilst having treatment.
All the Brownies made posters asking for donations and received a large number of toys, DVDs, Playstation 2 games, puzzles and Arts & Crafts equipment which they took to the Children’s Ward themselves with Assistant Brownie Leader Carla Chant.

Play specialist Dionne Davies was delighted to receive the donation and gave the Brownies a Thank You card from the Children staying at the hospital. Dionne said “The toys and games donated will help make the children’s stay at the hospital that little bit better.”

Amie-Emily Dodds, Courtney Quarmby, Cerys Horner, Lottie Killoran and Lena Hood delivered the goods whilst Cerys Edmunds, who was unable to go to the hospital at that time, was delighted to receive the Thank-You card on behalf of all the Brownies who had taken part.