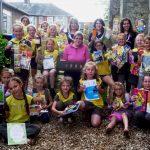 Brownies from the 10th Newport unit have once again helped children in Africa.

In the spring they undertook various challenges and raised around £58 for the Clean Water Programme in Africa. Now they have recently been studying the Ebola outbreak in Sierra Leone after hearing about it from Dr. Elizabeth (Beth) Smout from Carisbrooke who is a doctor at present working in this African country where she has been for the past 18 months.

Elizabeth is a researcher at the London School of Hygiene & Tropical Medicine and is currently based in Sierra Leone. She has worked as part of The Vaccine Confidence Project, which examines social and political determinants of public trust in health programmes but at present is in Africa undertaking a vaccination programme.

Living in Sierra Leone Elizabeth found the conditions for children extremely poor. Many children are orphans or have only one parent following the recent Ebola outbreak. Many look after younger siblings if parents are deceased. Attending school costs money so often a family can only pay for one child to go to school and when reaching the classroom there are no books, pens or equipment.

Usually homes are just shacks often built on what we would term a rubbish tip. There is little water and those children unable to attend school are keen to be educated but do not have any resources.

Hearing this plight all the Brownies decided to collect books and stationery equipment and managed to fill a large banana box with their collection. Hoping that Elizabeth would soon return to the Island to visit her parents Anne and Richard Smout they eagerly awaited her return to hand over the items. However, Elizabeth’s vital job in Sierra Leone has kept her there at present so it was her mother Anne who received the gifts from the Brownies.

Anne gave the Brownies an update on the Ebola outbreak saying that at present (July 2016) there are no cases in Sierra Leone and the vaccination programme has proved a great success. She was delighted with the Brownies gifts and told them that when Elizabeth does get the chance to visit the Island all their items will soon be heading to Africa where they are really needed. She explained to the Brownies how children in Sierra Leone are delighted with just one pencil so the gifts will please so many.

One of the many mothers that Elizabeth has been caring for recently named her newborn daughter Elizabeth after the British doctor who had cared for her and her family. Anne also mentioned to the Brownies that her daughter had been a Brownie in Carisbrooke and perhaps one day some of them may be doctors too.

Since moving from their previous meeting place the Brownies, Guides and Rangers who meet at St. John’s Church Hall  have not only been busy supporting Africa but have helped the St. John’s community as well.

Harry Walker from St John’s said, “In the short time the members of Girlguiding IW have been meeting in our church hall they have been very generous in helping the St. John’s community. They have donated a water butt and an evening organised by the Girlguiding members made a valuable contribution to our 2020 initiative. We are very pleased to have all the Girlguiding units meeting in our hall.”