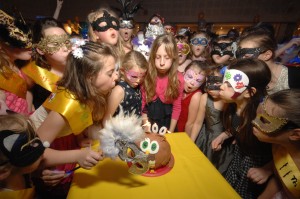 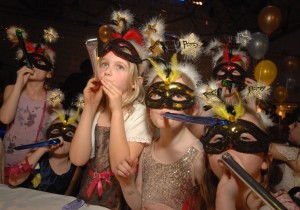 100 Years for the Brownies and what a party!

With hundreds of girls and their leaders packing into the Events Centre at Cowes Yacht Haven this event proved to be very exciting for everyone and the very colourful party was certainly a time to remember.
Throughout the function , which was hosted by Janet Lovell (Island Commissioner) and planned by a committee headed up by Felicity Harris (Brownie Section Commissioner for ‘Farringford’),all the girls enjoyed music, dancing, competitions and tea with Birthday Cakes .
Prior to the event a competition had been organised to design a badge to celebrate the 100 years. There was a fierce challenge to see who was the best designer and Kohana Reid (8) of the 10th Newport Unit was the winner. Everyone attending was given one of the badges as a special memento and Kohana was presented with a certificate for her art work by Martin White. (Lord Lieutenant)

Advertised as a Masked Ball everyone dressed in their finest party wear and of course wore the masks that they has designed and made. There were prizes for the best masks and the best dressed with 2nd Carisbrooke Unit winning the best masks and 11th Newport Unit coming out as winners for the best dressed.
Another competition held on the evening was for the best decorated cakes. With hundreds to choose from it proved a difficult task for the judges. 1st. Wroxall Unit was the overall winner.
Judges for the various competitions were Martin White (Lord Lieutenant) and Mrs. Fiona White, Mary Case (High Sheriff) Sir Guy Acland, Solange Rebours (Girlguiding SW England Chief Commissioner), Shirley Robertson (Girlguiding IW Ambassador), Anthony Roberts (IW Scouts), Jenni Freeth (Girlguiding SWE) and Enid Blackmore (VP Girlguiding IW).
Other special guests included other Girlguiding Vice Presidents from across the Island.

Mary Broadsmith (8) from 2nd Wootton Brownies said “ I love Brownies but this has been the best ever. I have enjoyed all the competitions and dancing”. Fellow 2nd Wootton Brownie, Freya Sewell (8) added “I really liked the evening. The dancing was best”.
Two brownies from 2nd Carisbrooke, Molly Sander (9) and her friend May Zaimi chorused “We are best friends. We love Brownies and this was great fun.”

Janet Lovell said” It was a delight to see the girls faces as they entered the Events Centre. They danced the night away.”

This was the first of several special events planned for ‘Brownies100’ on the Island.