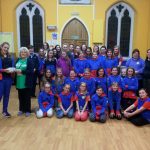 Brownies from the 11th Newport unit and Guides from 1st Carisbrooke have recently been giving support to Macmillan IW.

Both units held coffee events –the Brownies organised a coffee evening at Newport and the Guides held a coffee morning at Gunville.As well as serving drinks there were stalls laden with delicious cakes and other items to eat. 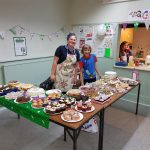 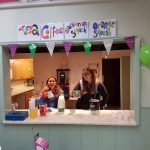 Fantastic sums of money were raised for the charity with the Brownies raising £282.64 and the Guides £205.85.

A presentation of the money raised by the Guides was made to Christine Lloyd a volunteer with Macmillan IW.

At another event in aid of the same charity the Guides of Compton Section decided to sing 100 songs at a special campfire ‘Singathon’ event. As well as singing the guides enjoyed a soup and hotdog supper followed by a sleepover and breakfast.  This event was held in the 1st Newport Scouts Hall. 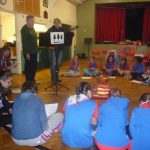 Dozens of Guides and their leaders attended and the money raised at this event, by sponsorship of singing 100 songs, was divided between Macmillan IW and the Guides own units. Songs were led by a group of Girlguiding IW leaders. 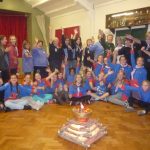 There were also two presentations of certificates at the ‘Singathon’ with Janet Corbett, Leader of 11th Newport Guides gaining a certificate in the ‘Going Away Scheme’ 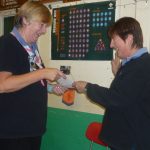 and Amber Corbett  (14) gaining her Young Leader In Training Certificate.

Linda Stone, Section Commissioner for Compton Section said, “It is excellent when all the Guides can get together. It gives them the chance to make new friends and by having the campfire and sleepover it gave some an introduction as to how camping with a lot of people can be.”