For a number of years 10th Newport (Congregational) Brownies and Guides held their regular meetings in Newport Congregational Church Hall until it and the adjoining church was sold in 2002.

After its sale the church building became a nightclub by default whilst the members of the congregation and the Brownies met elsewhere for their respective worship and meetings. Now following extensive redevelopment by the pub chain J.D. Wetherspoon the old church building has reopened as ‘The Man in the Moon’.

For some 150 years the Congregational Church was on this Newport site. In Gothic style the ‘Great Chapel’ was built in 1884. Research has revealed that before that a previous building bore the name ‘The Man in the Moon’.

On the outside the stonework has been thoroughly cleaned and re-pointed while inside many features have been retained, including stained –glass windows. Floorspace on the upper level has been increased in order to accommodate diners.

Rev. Mark Evans, the minister in charge of the re-born Newport Congregational Church was pleased to see the upstairs of the main building had no bar, gaming machines or music. He felt the redevelopment of the building had been handled with care and respect. Down stairs in the space that previously held the church organ an open fireplace has been incorporated.

A number of the current Newport Congregational Church congregation, some of whom had been married in the old church, were amongst those invited back to the building to view the changes undertaken by pub manager Tony Duncan. Rev. Mark Evans accompanied them and included in the guest list was Norma Godfrey who was the leader of 10th Newport Brownies in the 1960s and 1970s.

Another guest was Ruth Upward who was the Brownie Leader with Parkhurst Brownies. Because there were no Guides based in Parkhurst Ruth would send Brownies who wanted to be Guides to the 10th Newport Unit.

With the sale of the church in 2002 members of Girlguiding together with the members of the congregation had to find a new home.  For a number of years this took the form of a vacant shop in Newport High Street until the new place of worship and hall was built in Pyle Street.

For anyone interested in the history of Newport there is a good collection of old Newport photographs and documents displayed at ‘The Man in the Moon’. These are complemented by commissioned art work by local artists and information boards relating to events and characters of bygone Newport.

Children, accompanied by an adult, will be welcomed at ‘The Man in the Moon’ until 9pm.  As a condition of the licence both the adult and child must order a meal before 8pm if the adult wishes to consume alcohol. 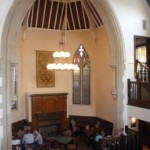