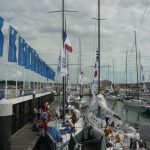 Following Saturday’s Skippers Briefing at the RORC Clubhouse in Cowes all the teams in this year’s Brewin Dolphin Commodores’ Cup were able to get to know each other at a reception hosted by Michael Boyd Commodore of the RORC. There was the chance to meet Rupert Tyler, National Director of Brewin Dolphin who said that his company were, once again, pleased to be title sponsors of the event and wished all the competitors ‘good sailing’.

At the briefing competitors were introduced to Nick Elliott RORC Racing Manager and Stuart Childerley. Skippers were reminded that sails could not be changed except under exceptional circumstances and that there would be penalties for the non-use of trackers.

Several local sailors are taking part in the regatta. Hugh Dudley is crewing on board Herzliya Daniel renamed for this event from Salvo which is owned by Cowes resident Peter Morton. This boat, as are the other two vessels in the team from Israel has been renamed due to sponsorship. Cowes resident Hugh has been sailing since he was a boy when he was under the wing of his father John, one time Commodore of the Island Sailing Club and recently appointed chairman of the Cowes Yacht Haven Board.

With a southwesterly breeze relatively light at the 1030am start but by the end of the final race mid-afternoon the wind had picked up to 20+ knots, with some lumpy wind-against-tide conditions.

Stand-out team on day one was favourite, France Blue, but second-placed France White was in contact with their fellow countrymen as were their neighbours in the Flanders North Sea team.

There was an outstanding start for RORC Admiral Andrew McIrvine and his First 40 La Réponse in GBR Red Team claiming the opening race of the day, but they were subsequently 12th in race two.

Monday saw the start of the long offshore race for the 24 competing yachts in the Brewin Dolphin Commodores’ Cup. Designed to last 24 hours or more, the offshore race is the longest in the Royal Ocean Racing Club’s biennial flagship event and it comes with a 2.5x points co-efficient.

This year the race committee set a course of 153 miles. Starting from the Royal Yacht Squadron line Cowes, the course was east down the Solent and along the Sussex coast towards the turning mark of Royal Sovereign south of Bexhill. The boats then returned west sailing south of the Isle of Wight through the night, then past the Needles Fairway Buoy and on to the finish at the North Head buoy off Milford on Sea. En route there were some tactical decisions to be made with boats obliged to avoid the large exclusion zone around Rampion Wind Farm, south of Shoreham-by-Sea and right in the middle of the race course both outbound to Royal Sovereign and on the way back.

While the big boats seemed to have the upper hand, with James Neville’s HH42 Ino leading the way, the tide turned foul en route to St Catherine’s Point allowing the smaller slower boats to catch up through the night.

Needles Fairway Buoy was reached around dawn on Tuesday by some before the finish line at Milford on Sea.

Breakfast time in Cowes saw some furious adding up to resolve the winning team.

Initially France Blue, overall leaders after day one, looked strong with their two big boats, Eric de Turkheim’s A13, Teasing Machine, and the Prietz family’s JND 39, GOA, in front. However, as boats started finishing the Flanders North Sea team edged ahead but it wasn’t until almost all the boats had finished that with the handicaps kicking in France White jumped into the lead by two slender points ahead of their European neighbours.