This year sees the end of the Baden Powell (BP) Award for members of Girlguiding. Now replaced by other challenges the badge has been gained by several girls on the Island over the years.

The last girls on the Island to receive the prestigious Baden Powell Award, the highest award in the Guide Section, received their awards recently. To achieve the award the girls have raised money for charities, given service in the community, gained new skills and many badges, and taken part in adventurous activities and camps, and a special Challenge Adventure weekend.

Girlguiding has recently launched a new programme with Gold Awards being the highest award now available to each of the Guiding Sections.

Four girls from Carisbrooke received the Award: Erica Hiscock, Olivia Brading, Tessa Bryson and Caitlin Cross who were presented with their Awards by Jacquie Harvey of 1st Carisbrooke (Princess Beatrice Own) Guides. 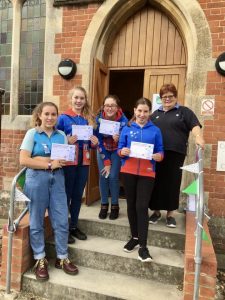 Also receiving the Award was Erin Lee from Binstead who was presented with her Award by Linda Stone Section Commissioner for Guides and supported by Julia Downer from 1st Binstead Guides. 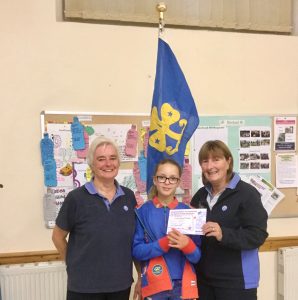