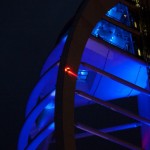 Island residents and those on the mainland with a view of Spinnaker Tower, Portsmouth will be able to view it in a blue light on January 30th thanks to Girlguiding IW’s Island Commissioner Deborah Meadows.

At present Spinnaker Tower can be illuminated by floodlights from dusk through the evening to midnight in the chosen colours of charities or individuals who wish to commemorate something/someone special or promote their cause. Those selecting to do this give a donation to the Dame Kelly Holmes Trust. Deborah Meadows said, “I picked up this idea when mentioned on Radio Solent and thought it sounded something we deserved in GIW.”

Deborah added “Our membership is thriving and the Guiding we provide at unit level is superb. The illumination is a small opportunity to celebrate this.”