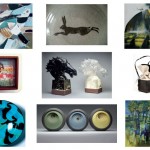 Next week, the resident artists at Binnel Studios will be opening their workshops and studios to the public for their debut Summer Exhibition.
This exhibition will be open between 2pm – 6pm on Saturday 29th August, and 11am – 4pm on Sunday and Monday (30th & 31st August).

Binnel Studios are situated in St Lawrence near Binnel Bay and if travelling from Ventnor drive through part of the village until you reach Old Park Road (on your left) and then follow the signs for Binnel Studios. At the moment, unless you plan to travel down the steep St. Lawrence Shute, this is the only access road with Undercliff Drive being shut. Of course there is the pleasant coastal path walk from Ventnor if the weather is fine.

Entry is free, but don’t forget to take your credit card as you might just want to purchase what you see as there will be a diverse array of works of art from paintings, in all mediums, to pottery.

When Isle of Wight Studio Glass moved out of their St Lawrence home in 2013, many wondered, especially local residents, what would become of the tranquil area.

One resident decided to do something about the situation and thanks to the hard work of Amy Beushaw and the continuous support from family, friends and locals of the area, Binnel Studios were created and are now the home to some of the most talented Isle of Wight artists.