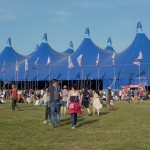 Germein Sisters:Georgia, Ella and Clara, having spent their childhood jamming together on their family’s bushland property in the Adelaide Hills, have now toured Australia, New Zealand, China, Germany and London.  Their irresistible charm and flawless harmonies have been compared to the likes of The Corrs.

Simon Townshend has released 8 solo albums and one with the band Casbah Club, all released through his own US label Stir Music. Simon will be taking to the Big Top stage performing tracks from his upcoming albums ‘Denial’ and ‘Looking Out Looking In’.

Bang Bang Romeo will be bringing their dark, atmospheric rock ‘n’ roll to the Big Top stage. Their sound draws on influences from the likes of Jefferson Airplane who performed at the original IW Festival in 1968.

The Lounge Kittens saw fame in 2014 with their viral internet video for their cover of ‘Rollin’ by Limp Bizkit. This band’s covers have been wowing fans in the UK and in Europe and their tuneful and cheeky style will certainly give a sparkle to the Big Top stage.

The Carnabys started out playing Rolling Stones and Kings of Leon covers in pubs but more recently,  have been on a world tour and supported numerous big names. They’ve opened for the likes of Patti Smith, Bruce Springsteen, Kings of Leon and Lenny Kravitz.

South Coast four piece The Novatones are an indie-punk band. Since forming in 2012, their loyal fan-base grows bigger each year and they have their debut album out in the Summer.

Kerri Watt was born and raised in Milngavie, just outside Glasgow and was a music fan from an early age, singing and playing piano at school and competing in regional dance shows by the age of 8. Her path has only been upwards since then with her most successful single to date ‘Long Way Home’ winning huge support from BBC Radio 2, climbing onto the station’s A List.