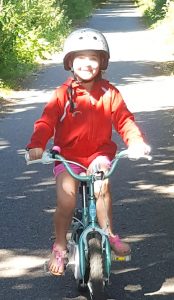 Girlguiding was selected by Bicycle Island as their charity to support for June.

The challenge: to ride the Newport-Cowes cyclepath as many times as possible and register your endeavors on the Bicycle Island App.

What a month! The total reached was a record-breaking 2859km raising a total of £772. Well done to everyone who took part – especially EJ and Iain who rode an astonishing distance between them.

Some members of Girlguiding IW took part riding from Newport to Cowes and back.

Girlguiding IW is part of the leading charity for girls and young women in the UK. Through fun, friendship, challenges and adventures girls are empowered to find their voice, inspired to discover the best in themselves and to make a positive difference in their community.

Money raised from this challenge will be used to finance the ‘New Programme’ book for members. The new programme is due to be launched on 21st July and will cover six sections: Know Myself, Express Myself, Be Well, Have Adventures, Take Action and Skills for my Future.

As part of the new programme Girlguiding IW leaders are hoping to organise an Adventure Camp for all the IW girls in the not too distant future.

All members of Girlguiding IW would like to thank Bicycle Island, Red Funnel and all those who undertook the challenge.