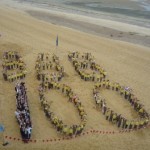 Hundreds of Brownies from across the Island joined their leaders for the last of the special events which have celebrated the BIG BROWNIE BIRTHDAY-100 years of the Brownies during 2014.

After the Masked Ball held in January at Cowes Yacht Haven and Star Quest held at IW Steam Railway, Havenstreet held on mid-summer’s day the final Island event was a beach party -and more-held on Appley Beach, Ryde.

All the Brownies were welcomed to the event by Assistant Island Commissioners Lyn Rogers and Lesley Clifford. 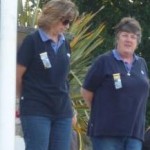 During the afternoon a number of special games were arranged together with every Brownie making a sandcastle decorated with a commemorative flag.  Girlguiding’s World Flag was hoisted on the beach and at the end of the event all the Brownies and leaders formed a large horseshoe shape in front of their unit flags. Here action songs were enjoyed and two leaders renewed their Girlguiding Promise and were presented with leadership certificates by Island Commissioner Deborah Meadows. 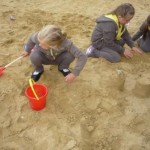 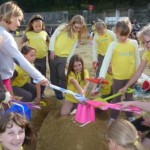 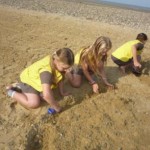 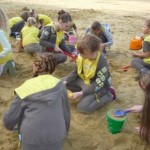 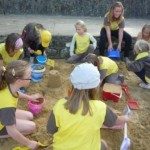 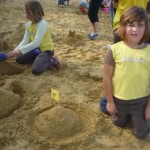 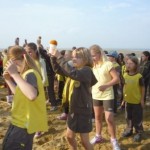 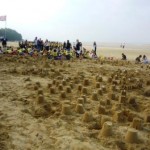 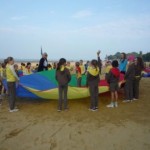 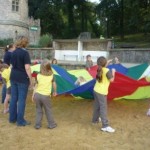 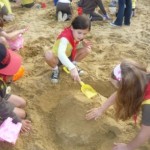 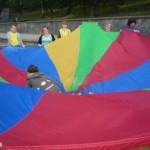 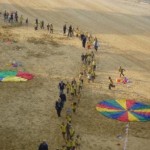 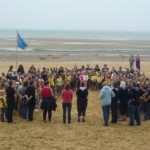 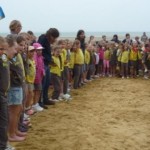 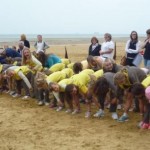 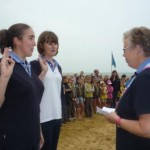 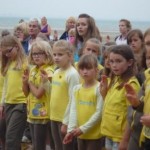 Following this all those present renewed their Promise and it is believed that this is record for the largest number of those renewing their Promise on a beach.

However the highlight of the event was the forming of Big Brownie Birthday (BBB) 100 on the beach. Following marked -out lines the hundreds of Brownies and the leaders marched into position and this unusual beach sculpture was captured in photographs taken from the top of Appley Tower with kind permission of IWC and Martin Jenkins.

This event and the other special events to celebrate the 100 years were organised by the Brownie Section Commissioners: Felicity Harris, Rachael Banting, Katie Charlton, Angela Smith and Collette Atkins and Brownie leaders.