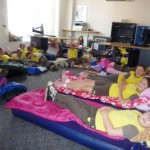 Brownies and Leaders from 11th Newport Brownie Unit recently undertook an unusual sleepover by sleeping in the Newport branch of Barclays Bank.

This event was arranged by Brownie Leader Clare Langley who works at Barclays and said “All the Brownies were really excited by this unusual sleep-over venue as no one had slept in a bank before!”

After setting up beds and sleeping bags the girls played games until the arrival of pizzas for supper. More games and activities followed supper and a late bed time was finally reached.

After the night’s sleep a breakfast of fruit and toast was enjoyed by the twenty plus Brownies who attended.

Unusual places for sleepovers are becoming a bit of a tradition for Brownie units with girls across the UK choosing museums and other public buildings for a night away from home and family.