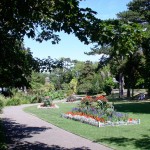 Historic Ventnor Park which dates from the 19th century has been awarded the Park of the Year Award at the South and South East England in Bloom Awards.

It is the first time one of the Isle of Wight Council’s parks has been named park of the year at the prestigious awards ceremony, which this year was staged in Brighton.

Ventnor Park is one of four Isle of Wight Council parks recognised at the awards.

As well as being park of the year, Ventnor Park also received a gold medal certificate.

Awards, at the event, were presented by South and South East England in Bloom chairman, Peter Holman, Jim Buttress from the BBC’s The Big Allotment Challenge, and Blue Peter gardener Chris Collins.

Last year, when entered for an award for the first time, Ventnor Park was awarded a gold medal.

The judges this year described Ventnor Park’s summer bedding borders and raised planters as “superb”. They also noted that “horticultural maintenance was of a high standard”, and described the park as “the quintessential Victorian park and the jewel in the crown of the Island’s parks”.

Ventnor Park covers an area of about seven acres. It features landscaped grounds over a range of different levels, with mature trees, shrubs, herbaceous and bedding borders, a bandstand, a stream with gentle falls and water fowl, a putting green (under concession), and an adult outdoor exercise equipment area.