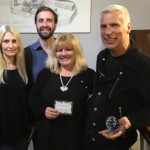 Isle of Wight Festival has won the ‘Best Activity/Event of 2015’ Award at the Visitor Attraction Association (VAA) Awards.

This event took place at the Needles Landmark Attraction, with the award voted for by the public following a survey of thousands of people at various localities on the Island last summer.Isle of Wight Festival promoter John Giddings attended the event to accept the award.

The actual awards were designed and made by Diamond Isle Glass which is based at Arreton Barns.