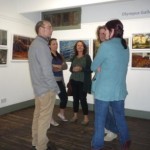 Renowned U.S. photographer Annie Leibovitz is the focus of the current exhibition in the Olympus Galleries at Dimbola, Freshwater.

Thirty one prints have been specially flown in from Los Angeles to celebrate the 200th anniversary of Julia Margaret Cameron’s birth.

In her forty five year photographic career Annie has captured many celebrities- including H.M. The Queen- through her lens and her illustrious career includes a myriad of assignments for magazines and corporate clients.

‘Pilgrimage’ is the result of Annie’s travels to some twenty odd destinations including the West Wight.

Scenes here include the chalk cliffs at Freshwater Bay, Tennyson’s Gate at Dimbola Lodge- Julia Margaret Cameron’s home at the time when Alfred Lord Tennyson was living at Farringford-plus a study of Julia’s camera lens.

Specimens collected on Charles Darwin’s voyages plus ‘Sandwalk’ the site of his daily constitutional at home, are also represented. Virginia Wolff’s Writing Studio at Monks House in East Sussex can be glimpsed as can Sigmund Freud’s couch in the Freud Museum. Vita Sackville-West’s Writing Room and Library at Sissinghurst Castle in Kent, also feature. Most imposing is the sheer size and majesty of Niagara Falls in Ontario. This photograph is also featured on the front cover of the book ‘Pilgrimage’ which complements the exhibition and is on sale at Dimbola.

Dr. Brian Hinton MBE, chairman of the Julia Margaret Cameron Trust welcomed guests to a preview on the eve of the exhibition, which was organised and hung by Dimbola curator Dr. Rachel Flynn, opening to the public. It will form the largest collection of Annie’s work to be on display in the UK.

Brian said that ‘Pilgrimage’  was a departure from her usually carefully composed studies and this exhibition was really about absences or places no longer inhabited by people. Viewers would notice there was a complete lack of human characters in any of the photographs.

As Annie had visited Dimbola twice in the past Brian hoped that she would visit again in the summer, before the show ended on 12th July.