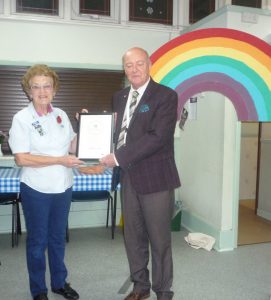 Sheila Cates one of the leaders of 11th Newport Rainbows has recently been presented with the Arm in Arm Award by Mark O’Sullivan from Age UK IW at a ceremony during a Rainbow meeting.

Mark said that Sheila was up against tough opposition but by helping the younger girls as well as older people-Arm in Arm- across the community she truly deserved this award.

Sheila has been ‘Robin’ to all the girls of 11th Newport  Rainbows for over 20 years and it was this volunteering plus organising meetings for Newport Townswomen’s  Guild plus attending dance classes and singing groups for older people that gained her the award.

All the Rainbows joined in congratulating ‘Robin’ and gave her a round of applause. 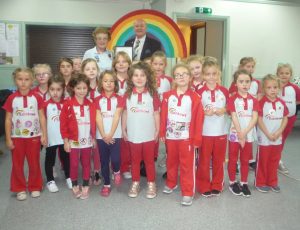