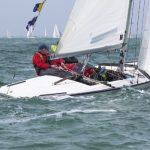 Aberdeen Asset Management Cowes Week has always welcomed first-timers to the regatta and a team are on hand throughout the week to provide any additional support that crews racing for the first time might need. There is also a First Timers Guide available. This year a new TNG Swiss Watches Trophy will provide special recognition for those who are new to Cowes Week.

Kate Johnson, Commercial & Marketing Director at Cowes Week Ltd commented, “While many crews race here year after year, we are always delighted when new boats come to Cowes Week. This year we are pleased to be able to recognise the most successful newcomer by awarding the Newcomers Trophy, generously supported by TNG Swiss Watches.””

The team behind ‘Swallows & Amazons’, in cinemas 19th August, have chosen Family Day at  Cowes Week to celebrate the release of the film with a range of fun activities including the appearance of a Swallow, the boat used in the film, on Cowes Parade and some great film giveaways.

Join in these adventures at this year’s Cowes Week Family Day, 7th August, as the upcoming film ‘Swallows and Amazons’ adds to the usual family fun.

Children can try out back to basics outdoor activities featured in the film which brings to life the classic novel by Arthur Ransome, telling the tale of the Walker children’s summer holiday in the Lake District, sailing, camping and fishing.

Everyone can learn a range of useful outdoor skills with the Sea Cadets, including sailing, tying a knot, making a shelter and even making a fire to cook their own dinner. Plus watch clips from the film, before its release, presented by the film’s producer Nick Barton. There will be the chance of battling in a giant tug of war, face painting, giveaways and the chance to get a fun photo with the Swallow boat.

Swallows (also known as the National Swallow) are a type of one-design keelboat and they were used as a two-man Olympic class for the 1948 Olympics in London.  In the Olympic Games of 1948 the Gold Medal was won by Stewart Morris and David Bond of Team GB. Swallows are now sailed with a  crew of three.