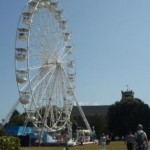 Throughout Aberdeen Asset Management Cowes Week the town centre and The Parade will have plenty of entertainment for all. Whether you are a competitor just in from a race, an Island resident or a visitor to Cowes there is such a wide choice, everyone should find something to suit them. Music, entertainers, facepainting and Glitter Tattoos will be based at various locations throughout the High Street, there will be lots going on in Cowes Yacht Haven and there are some events at Shepards Wharf Marina too which hosts the legendary Mount Gay Rum Red Cap Party on Thursday 13 August.

Cowes Parade Village will have a selection of places to eat and drink as well as stands including one from the regatta’s shoe sponsor Chatham and the Chilgrove Gin Bar on the Sunsail stand which will offer ‘Cocktail Hour’ at selected times.
Throughout the week Northwood Park and House will be worth a visit .There will be an Open-air cinema on some days, plus view the regatta from a great height on the Red Funnel Flyer, (big wheel) discover the Lawn Lounge or enjoy cream teas on the Eastern Lawn or Tree climbing with Goodleaf.

Most of these activities will be available from Saturday but to help parents and children get the most out of their time at the regatta, a range of family-friendly activities and group offers will be provided exclusively for Family Day on Sunday 9th August. These include:
‘Open to all’ sailing sessions with UKSA offering an hour’s sailing tuition with UKSA instructors between 9:30 and 18:00, for just £5. Visit them at their stand on Cowes Yacht Haven.
This year will see Cowes Parade Village being overrun by mischievous Pirates! Gemma Hunt, from CBeebies’ popular Pirate gameshow ‘Swashbuckle’ will be joining in an afternoon of pirate fun in front of the stage. Little pirates please wear your best fancy dress and in between shows learn how to survive on a desert island.
Organised by UKSA, the cardboard Boat Race, will be sailed off Cowes Parade at 15:00. Build your own boat and take part in the challenge to win some great prizes.
From 17.00 there is the opportunity to support UKSA, the AAM Cowes Week main charity, by looking out for ‘Boss up a Mast with UKSA’ on Trinity Landing. UKSA will also stage activities in Cowes Yacht Haven so please support this local charity which last year enabled Island Year 6 pupils to learn to sail. Some days ‘Boss up a Mast with UKSA’ will be based in Cowes Yacht Haven.
One of the many acts on the Cowes Parade Village stage will be a Fleetwood Mac tribute band from local music college, Platform One. They are on stage at 18.20 and following that great performance by Fleetwood Mac at this year’s IW Festival there will be a chance to compare the two.

Tuesday 11th features Liz Earle Ladies Day with a variety of fun and activities on and off the water:
Dress in nautical style and Win Prizes – Ladies ashore and afloat are encouraged to wear their seafaring navy and white stripes. Style-hunting teams will be out and about awarding some fabulous prizes for the most chic takes on the look.
At the waterfront Gallo Parade Garden Bar, Cowes Parade Village there will be the chance to enjoy a glass of Nyetimber sparkling wine and relaxing afternoon tea. Buy a glass of Nyetimber and be in with a chance to instantly win a prize including Oakley sunglasses, Liz Earle products or Nyetimber.
There are special offers for Ladies at shoreside venues during the day with Gill, Official Technical Clothing Sponsor, offering ladies 10% discounts and Liz Earle offering complimentary manicures, hand and arm massages and facials for £20 redeemable against product.

Thanks to the kind support of Artemis Investment Management, The Red Arrows display team will be back in Cowes – this year on the Thursday evening at 1850- and Watch the RAF Typhoon display performing at speeds of up to 600kts (690 mph) on Friday prior to the fireworks display.
Final prize giving for those who have won cups and trophies during the week will be in Cowes Yacht Haven on Saturday 15th August.

Throughout the week Aberdeen Asset Management are running a photographic competition for the public. For details of how to enter see the official website.
With so many boats taking part in AAM Cowes Week the regatta will see some of the World’s finest yachts and crews. A number of these will stay in Cowes until the start of the Rolex Fastnet Race at 12 noon on Sunday 16th August from the RYS Line.
With nearly 400 boats taking part this is a grand opportunity for everyone to view from the shoreside.