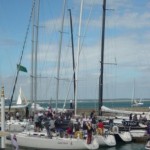 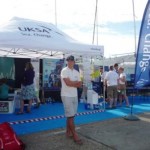 For AAM Cowes Week there were a number of events supporting the Week’s official charity, Island based UKSA. One of the regatta’s sub sponsors, Chatham, has donated a contribution from shoes purchased to the charity. Over the past few months Chatham customers have raised a sum of £1050. A cheque presentation took place with Philip Marsh from Chatham presenting the cheque to Simon Davies from UKSA. UKSA meanwhile held various activities and events to support the charity with the ‘Try Sailing’ proving very popular. 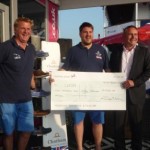 There were a number of sub-sponsor, company and organisation stands in Cowes Yacht Haven. Once again Mount Gay was the official rum supplier. Established in 1703 in Barbados, Mount Gay launched its Black Barrel premium rum thirteen months ago and this was available for a special event where an announcement was made to advertise a sailing regatta in the British Virgin Isles. Black Barrel is a small batch hand-crafted rum produced using pure coral-filtered Spring Water. It is matured for 12-18 months in toasted and charred Bourbon oak barrels giving it its distinct flavour. 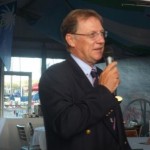 John Duncan, Governor of the BVI attended this Mount Gay reception in Cowes Yacht Haven. He said that he hoped the British Armed Forces sailing teams would contest the 2016 Spring Regatta in Nanny Cay on Tortola, one of the four main islands in the BVI group and added that Cowes had a great reputation for sailing regattas and BVI hoped to make their regattas just as well known. Mount Gay sponsor over 100 sailing regattas worldwide including the BVI one and the Armed Forces sailing teams will include disabled members. As ever, the now traditional Red Cap Party took place in Shepards Wharf on the Thursday of AAM Cowes Week.There was a wide variety of Caribbean inspired music including a steel band. For the first 500 people to arrive there was the now famous Mount Gay red cap. 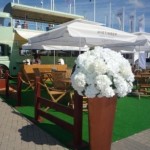 Another sub-sponsor with a stand was Nyetimber makers of fine English Sparkling wine. Based in Sussex and Hampshire their six vineyards produce a selection of wines.. Visitors to Cowes could enjoy the wines on board a vintage 1968 Routemaster double decker bus, with views, from the upper deck over the yachts in Cowes Yacht Haven, or in the bars on Cowes Parade. 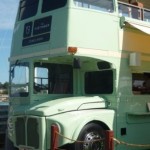 Nyetimber Brand Ambassador Iain Robb gave entertaining tasting sessions on the customised top deck of the ‘bus explaining that Nyetimber grow three classic grape varieties, Chardonnay, Pinot Noir and Pinot Meunier. Unlike some Champagne houses, Nyetimber never buys in grapes from other vineyards just using their own grapes from vines which were planted in 1988. The first harvest was four years later and the first Blanc de Blancs was released in 1997.
Nyetimber, a Sussex area dating back to the Domesday Book, will be hosting open days at the vineyard at West Chiltington, Sussex on 5th and 6th of September for anyone who missed them at AAM Cowes Week.

Kendalls Fine Art in Bath Road featured a number of sailing-based artworks by Island based residents. Martin Swan RSMA produced an evocative scene involving J Class yachts racing off Cowes whilst Lancashire born Shane Couch, who now resides in East Cowes had also captured the ‘J’s. One of his oil paintings depicts the J class racing in Osborne Bay in 1934.
Shane, who was commissioned in 2001 to record the America’s Cup 150 Jubilee, has also painted Eleonora and Mariquita in more recent times. Eleonora has been in Cowes for much of this summer and is certainly an elegant classic yacht. 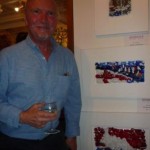 After a 35 year career as a graphic designer Brian Marriott diversified into turning surplus glass into unique contemporary glass designs. A period of experimentation and trial and error producing his artwork ensued before he achieved a winning formula.
Kiln proof ceramic plates are used as the base for his artwork. Temperature and timings are critical with a typical firing taking ten hours at a minimum temperature of 720 degrees. A further cooling down period of ten hours is then undertaken. His unique designs are glossy, brightly coloured and almost 3D like. Recently, Brian has produced a number of pieces to commemorate the Royal Yacht Squadron Bicentenary.

Only one Charter Fleet has a class of its own at AAM Cowes Week and hold a regatta within the regatta. In the 30 strong Sunsail Match First 40s entrants can race with or without the assistance of a Sunsail skipper. One of the locally based teams is Red Funnel which started the week well but later slipped down the leaderboard. 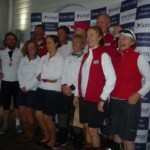 Of local interest Cowes resident Chris Preston, a Board member of Cowes Week Limited, took the latter option. After a finance career that saw him based in Switzerland he settled in Cowes in 2014 where he has set up his company PCP. For racing he called upon the crew from the Swiss entry in the last edition of the Clipper Race.
Chris’s strategy saw his crew take overall runner-up slot in the Finance Challenge section of the Sunsail class and team PCP (Switzerland) were another group of people who chose to raise money for UKSA.
After competing in each of the five years they have been the headline sponsor of Cowes Week, the crew from Aberdeen Asset Management took the overall Sunsail title as well as the Finance Challenge Trophy.
At Thursday evening’s Sunsail Prize giving Rugby legend Gavin Hastings presented the trophies.

Saturday evening saw the main prize giving and the main awards of the week overall going to White Group- ‘Dauntless’ and Black Group-‘Yes!’. Adam Gosling ‘Yes!’ also won the Aberdeen Asset Management Overall Winner Trophy. Compere for the event was Dick Johnson from Cowes Week Radio who in summing up added his thanks, for his work over the years, to Stuart Quarrie who is retiring from the post of Director of Sailing Cowes Week Limited.