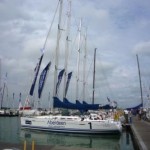 For those who prefer their entertainment on shore during AAM Cowes Week here is a guide to some of the special events.  Of course all the usual entertainment is featured around Cowes with music and entertainment through the High Street, in Cowes Yacht Haven, on the Parade and in the grounds of Northwood House and do not forget Shepards Wharf. For the first time Northwood House has a big wheel  enabling riders to have a good view of Cowes  and the yachts at sea.

Based in Cowes UKSA, the charity which provides transformational opportunities to young people through sailing and watersports, is Aberdeen Asset Management Cowes Week’s official charity. One of its key aims is to raise enough funds to offer every Year 6 primary school child on the Island (a total of 1,600 children) the opportunity to experience water-based sports with UKSA.

In an effort to reach their fund-raising target, UKSA is running a series of attractions including the ‘open to all’ sailing sessions, which offer an hour’s sailing tuition with UKSA instructors aboard one of its three keelboats each day between 9.30am and 6pm, for just £5.

The ‘Boss up a Mast’ fundraising spectacle, which is taking place on Sunday, Monday and Tuesday evenings, is also likely to be a big hit.  UKSA will moor one of its Farr 65s in the Yacht Haven so that spectators can watch senior executives, locked into a Spinlock Mast-Pro harness, raised 100ft to the top of the mast. The idea is that the boss can only come down once they have urged their contacts (via mobile phone) to pledge donations to UKSA. Visitors are also encouraged to #masterthemast. In return for a small donation, UKSA are offering the opportunity to climb the mast of Gipsy Moth IV, which will be moored in the Yacht Haven each day from 11.30am until 2pm.

The Blades aerobatic display team, will be performing over Cowes at 19:00, courtesy of local letterbox, and are a leading display team of former Red Arrow pilots renowned worldwide for precision, close formation aerobatics at the highest level within a dynamic and cutting-edge display.

All of the Blades pilots are experts in aerobatics boasting some of the country’s most experienced display pilots, and currently hold the Guinness World Record for the most number of consecutive formation loops.

A series of initiatives are in place to help parents and children enjoy Family Day.

On Cowes Parade, Andy Day, as seen on Cbeebies, will be having a dinosaur adventure along with ‘Shadow’ the mischievous T-Rex from Blackgang Chine.  These performances take place at 12:30 and 14:30. Also on The Parade there will be Fun activities with JackFM, including air guitar competitions. The cardboard boat race, organised by the Southern Co-operative in support of UKSA is off Cowes Parade at 15:00. Build your own boat and take part in the challenge! Download the entry form and sponsorship form at www.manvswight.com or pick them up from Cowes Co-op.

The centenary of the first shot at sea in the First World War will be marked by a sailpast by the Royal Navy on Tuesday 5th August. This sailpast by RN patrol vessel HMS Mersey off the Royal Yacht Squadron will take place at 10.am.

A single cannon will be fired by the Royal Yacht Squadron and spectators and competitors will join together for a one minute silence in memory of all those who have served in defence of the nation.

A second cannon will signify the end of the silence. In addition, this year’s race for The Britannia Cup, organised by the RYS, will be held in commemoration of the centenary of the Great War at Sea.

In celebration of the 80th anniversary of the Victory Class, a ‘One Hour Victory’ race is being held with the start gun being fired at 17:30.

The one-design race is aimed at raising awareness of the growing fleet of Victory yachts which race out of Portsmouth and Gibraltar. Good viewing can be had from the Green. Each Victory racing in this special anniversary race will have a crew provided by title sponsor, Aberdeen Asset Management, official Supporting Sponsors, Chatham Marine, Gill, Boss Watches, local letterbox, Mount Gay Rum, Volvo Car UK, official Suppliers, Solent Events, Britannia Corporate Events and official Charity, UKSA.

After the race a prize-giving will be held on Cowes Parade at 19:00.

There are a variety of fun activities that take place on Ladies Day which include: Ladies Lunch with The Hambrough at Northwood House: on-the-water spot prizes awarded to female sailors and competitions with the Breeze FM on Cowes Parade throughout the day.

The RAF Typhoon Display Team will be demonstrating the outstanding performance of the Typhoon, thanks to support from local letterbox at 19.10. Pulling +9 to -3.5G and flying at speeds of up to 600kts (690 mph), new manoeuvres such as the inverted ½ Cuban eight, a ‘dirty’ (with undercarriage down) barrel roll will be on show.

This will be followed at 19.30 by The Red Arrows now in their 50th display year. Renowned throughout the world as ambassadors for both the Royal Air Force and the United Kingdom and recently featured in a TV documentary the Red Arrows will be flying over the Island for a second time following their recent display at the IW Festival in June. Don’t miss out on their sensational display at 19:30 thanks to support from local letterbox. And- do not miss the Fireworks at 21:30.

Cowes Yacht Haven has been turned into an entertainment area for the whole week. With food and drink stands, including one offering Laithwaite’s wine and Champagne, there is something for all tastes. Laithwaite’s are the official providers of wine and Champagne to the regatta. Whilst enjoying your food or drink there is a big screen showing the day’s events to watch and entertainment from a variety of performers on the stage.