Of course the sailing has been great for competitors, except  when races were cancelled due to lack of wind on Thursday and Friday, social events have been held all over the town and with good sunshine throughout  most days this year’s  AAM Cowes Week has been hailed a success.

For the general public there was good live entertainment at various venues, in many cases showcasing Island talent and there were plenty of activities for children. Long queues formed for photographs with the Abu Dhabi falcon with the finished product transporting those photographed to Abu Dhabi.

AAM Cowes Week’s chosen charity UKSA ran learning to sail sessions as well as shore based fun activities and the ‘Boss up the Mast’ proved a hit and helped raise some of the much needed cash to enable UKSA to get all the Island’s year 6 students into sailing.

Regattas such as Cowes Week cost a lot to run and as well as the title sponsor Aberdeen Asset Management, other sponsors help to provide the money or goods for these large events. For adults there were wine tastings on the Parade and in Cowes Yacht Haven presented by one of the regatta’s sponsors. Laithwaite’s Wine was launched by Tony Laithwaite 45 years ago. Now a global company they have a large presence in Bordeaux. With a vineyard near Windsor Castle they will soon be offering ‘local‘ wines to Her Majesty the Queen. Operating 10 shops as well as on-line sales they were selected to be the official wine suppliers to AAM Cowes Week and Laithwaite’s Champagne was used to toast the winner of this year’s Ladies Day, Dee Caffari who learned her serious sailing at UKSA. As well as Dee being presented with the trophy made from Island glass she was presented with Laithwaite’s Champagne and a bottle of Mount Gay Black Barrel Rum. Shirley Robertson, Girlguiding IW Ambassador, hosted this presentation. Shirley had a busy week and was seen on her scooter getting from event to event. When it was mentioned to her that she had been seen scooter riding she replied ” You should have seen me on the scooter in my high heels!” 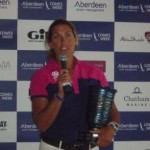 Mount Gay was again the official rum supplier for the regatta. Company rep Miguel Smith travelled from their Barbados base to spread the word about Black Barrel, a premium rum at 43% ABV.  Officially launched on 1st June this rum is distilled twice and then stored for an extra 12-18 months in blackened Bourbon casks. As a result the rum resembles a fine whisky.   Mount Gay hosted the annual party at Shephard’s Wharf with 500 sailors and friends chasing the much coveted Red Cap.

Chatham Marine, another supporting sponsor, had a prime site in the Cowes Parade Village. Their large stock of footwear was brought to the Island in two very large trucks. Now in its 25th year Philip Marsh is the Managing Director of Chatham Marine and as a family owned concern the staff is well motivated. Chatham is gradually extending its range of footwear and all the latest colour ranges are now part of their brief. To ensure it does not only sell deck-shoes other ranges include brogues, trainers, casual shoes and ladies high boots. In a special 1 hour yacht race sailed in Victory Class boats on Wednesday evening off The Green the boat supported by Chatham Marine was the winner. This race celebrated 80 years of the Victory Class. 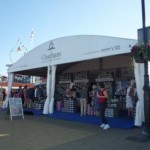 More special sailing off The Green took place on Thursday evening when 6 Olympic Star Class boats from Fine Art Sail gave a demonstration. With sails depicting art from across the world Fine Art Sail is a legacy of the Olympic Games. 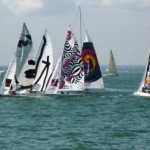 Visitors to Cowes could not miss the Big Vue Wheel located in Northwood Park. Standing 33 metres high the wheel has a diameter of 29.5 metres. Comprising 24 cabins the Vue Wheel afforded panoramic views of Northwood House and Park, along the River Medina to Newport and over the downs to Rowridge and beyond.  Seaward there were views of a plethora of racing yachts dotted across the Solent and Spinnaker Tower, Portsmouth in the distance.

Run by De Koning Leisure, based in Manchester, this wheel travels all over the country packed on 3 transporters. It was a return visit to the Island having been at Seaclose Park for the IW Festival and during the next few weeks it will be placed at various shows and events before returning south for the PSP Southampton Boat Show in September.  At most times there was a steady queue waiting to board and Cowes Mayor Geoff Banks and his wife Kay took a ride on the wheel and certainly enjoyed the views over the town and the River Medina. 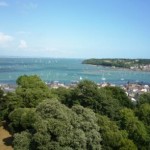 Northwood House and Park really seemed the place to be for sailors, locals and visitors. Cream Teas provided by Wight Vintage was so well supported that this local company decided to open for an extra day as did the wheel. 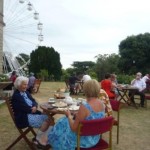 Also in Northwood Park this year’s version of the Annual Bowls Tournament took place. Supported by Geoff Banks, Mayor of Cowes this was the 60th running of the competition and in recognition of this Geoff presented a new trophy which was won this year by John Crews.

Moments after the trophy presentation on Friday the first drops of the rain, that was to continue for some hours, fell on Cowes. However the evening’s planned entertainment went ahead as arranged and despite a number of yacht races being lost through lack of wind there was much interest at the final prizegiving to see who came out top of their class for this year’s AAM Cowes Week.