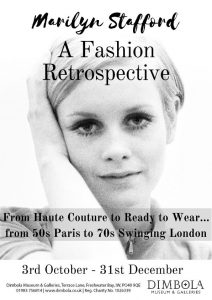 Dimbola, Freshwater is staging two new exhibitions starting in October and running through until the end of the year.

Marilyn’s early dreams were for a theatrical career. Her photographic career was launched in 1948 in New York where she had gone to find work on the Broadway stage.

By the 1950s she had married and moved to Paris where French women of means had their clothes made to measure in the grand Maisons de Couture. Middle class women would have these models copied from fashion magazines by their own dressmakers and enterprising French manufacturers found young designers and began making affordable and very stylish ready-to-wear items.

Most fashion photographs at that time were taken in a studio or in elegant venues but as Stafford recalls, “I preferred to take the models onto my beloved streets of Paris.”

She would even let the street kids pose with the models. Moving to England in the mid1960s she found swinging London and its young designers, all of which are included in this exhibition.

Following a lifetime in photography in February 2019, Marilyn Stafford received an Award for Exceptional Achievement in Photography from UK publication, Amateur Photographer and more recently in March 2020 she received the Chairman’s Lifetime Achievement Award from the UK Picture Editors’ Guild Awards in London.

A second exhibition, Andrea Muendelein –“ Polaroids” will be housed in the Charles Hay Cameron Gallery.

London based photographer and university lecturer, Andrea, will showcase her Polaroid originals with her early Polaroid work exploring her engagement with portraiture and painting during her time at Central Saint Martins College of Art between 2003 and 2005.

Polaroids are original, non-reproducible photographic images characterised by an immediacy of process in the form of instant development.

Andrea is now a visual artist working with photography having graduated with a PhD in FineArt Photography from Central St Martins, University of the Arts London in 2019.