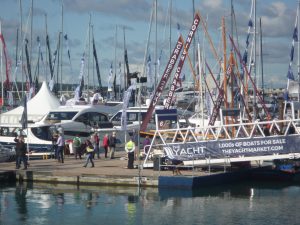 Over the years several Island companies and organisations have attended the London and Southampton Boat Shows to present their products to the wider boating fraternity. Much new business has been secured for the Island which has maintained jobs here.

Now British Marine, the owners and organisers of the London Boat Show, has announced that the 2019 Show, due to run at ExCeL London in January 2019, will not take place leaving Southampton as the major UK Boat Show for exhibitors and visitors alike. Island firms and organisations will now be attending the Southampton Show, but several are regular attendees there including BVD Marine from Bowcombe.

TheYachtMarket.com Southampton Boat Show, now Britain’s biggest and best festival of boating, will showcase a selection of yachts and power boats and takes place 14th-23rd September, in and around Mayflower Park just steps away from the Red Funnel Terminals. For visitors from the Island Red Funnel passengers will be able to buy their Show entry tickets at the same time as ferry tickets.

This year, which celebrates 50 years of the show, there will be an exceptional line up of interactive attractions, the latest innovations, world launches and experts galore.

For the first show back in 1969 there were just 35 exhibitors with one pontoon boasting eight boats afloat. By 1980 the number of exhibitors topped 600 for the first time but there was a slight setback in 1981 when the Ocean Exhibition Hall was blown down in a storm. When recession set in the number of firms present dropped and by 1983 the show was purchased by the forerunners of BMIF now British Marine. Their subsidiary NBS are the current organisers.

Over the years a number of high- profile people have opened the show including Earl Mountbatten of Burma, Sir Max Aitken, Sir Alex Rose, Sir Chay Blyth and Sir Richard Branson and there have been visits from Olympic Sailing medallists.

Past events have attracted many visitors, with more than 123,000 attending the 2004 show and the 2005 event featured a makeshift beach, with tonnes of sand being imported.

For 2018 as well as everything boating there will be live entertainment, demonstrations, bars and restaurants. On the new Champagne & Seafood Terrace there will be a front-of-house, theatre-style area, where the restaurant’s fresh seafood dishes will be expertly prepared. During the course of the show recipes featuring The Hairy Bikers classic take on bold flavours and cooking style will be on the menu and on Saturday 22 September Si King and Dave Myers (a.k.a. The Hairy Bikers), will be dropping anchor at this year’s show to give an exciting cooking demonstration of one of their exclusive dishes.

Also, on the 22nd the fully restored ‘Maiden’ will be available for visitors to see before it departs on its three-year world tour from the Show. Before they set sail, Tracy Edwards MBE and the rest of the crew will be appearing on stage for a Q&A. A similar Q&A session took place in Cowes recently where we met with Tracy and her crew. ‘Maiden’ took Tracy around the World in 1989 when Tracy skippered the first all-female crew in the Whitbread Round the World Yacht Race.

There is something for all the family at the Boat Show- ideal for girls to learn about boating and water sports.