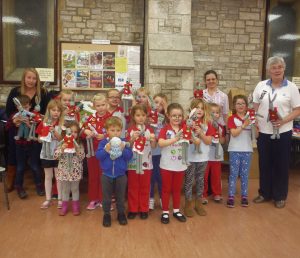 Cowes Rainbows, the youngest members of Girlguiding, have recently celebrated 30 years with a party and presentations of Rainbow Rabbit.

Rainbows started in the UK in 1987 when it was found that girls aged 5-7, who were the younger sisters of Brownies and Guides, wanted to join in the fun of Girlguiding too.

On the Island several units were formed and by 1989 Cowes was to follow with Helen Watson, already a Girlguiding leader coming forward to be a Leader. Helen’s daughter Racheal (now Cooper) was the first Rainbow to make her Rainbow Promise in Cowes together with some of her friends.
Five years later Tracy Witney joined Helen as a second Leader and both Helen and Tracy have led the Rainbow Unit in Cowes ever since.

Over the years hundreds of girls have belonged to the Cowes Unit many progressing to Brownies and Guides not only in Cowes but elsewhere on the Island and beyond. One such girl is Emma Cooper, Helen’s Granddaughter who has been a Rainbow, Brownie and Guide.
To celebrate the 30 years a party for all the present members, Helen’s family and friends of the unit was held. All those attending enjoyed games, some played were based on those played at the first meetings, plus today’s Rainbows were informed about past uniforms and activities. Cakes were enjoyed and all those present were presented with Rainbow Rabbits which were the first mascots for Rainbows in the 1980s. All the rabbits given out at the party were hand-made by Helen. 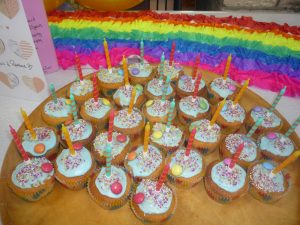 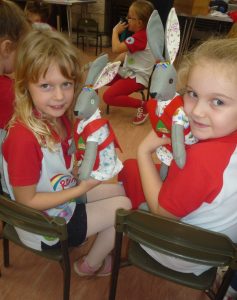 Today the Rainbow mascot is Olivia, a ragdoll in Rainbow uniform. Every week Olivia travels home with a different Rainbow and she is much travelled as not only does she visit the Rainbow’s homes in Cowes but travels with Helen on trips abroad.
Following their party, the next adventure for the Rainbows is a visit to a pantomime.