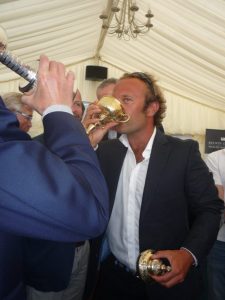 It is almost time for the start of this year’s IRC European Championship which for the first time incorporates the Commodores’ Cup. Yachts from across Europe are already gathering in Cowes for the start on Sunday 10 June.

This is the third running of the annual championship for RORC and UNCL’s jointly developed IRC rating system, but the first in IRC’s spiritual home, Cowes, following events in Cork and Marseille. To celebrate this, the 2018 IRC European Championship will be the most challenging yet, with a week-long format, mixing both inshore and offshore racing, including a long offshore of 24-36 hours duration (Wednesday/Thursday) and a race around the Isle of Wight to be sailed on Monday weather permitting.

Competition will also be lively between the Performance 40s, the newly-created class for boats. Here Roger Bowden’s King 40 Nifty is likely to lead the field on the water, while there will be the usual competition between a group of First 40s – from the Netherlands, Frans and Carla Rodenburg’s Elke, Alex and Andy Moore’s TiLT Racing, the team on Rob Bottomley’s Adventurer and La Réponse of Royal Ocean Racing Club Admiral Andrew McIrvine. The Performance 40s will also include regular Commodores’ Cup competitor Roderick Stuart and Bill Ram’s Corby 37 Aurora from Scotland.

Several of the most powerful entries will be coming from France and most are very familiar names in RORC racing. These include three- time Commodores’ Cup competitor Emmanuel Le Men and his Val Andre Yacht Club crew on board the First 40.7 Pen Koent. There are also three JPK 1080s: Most prominent is Arnaud Delamare and Eric Mordret’s Dream Pearls that dominated IRC Three in last year’s RORC Seasons Points Championship. No less potent are Marc Alperovitch’s Timeline and Jean-Eudes Renier’s Shaitain being campaigned by long time participant in Cowes waters Jock Wishart.

While the majority of the competitors in the IRC Europeans know the waters of the Solent and Channel well, some are new to it. Michael Mollmann and his Danish crew on their X-37 Hansen are one such crew.

To help ensure this works, the club has lifted almost all of the rating and entry restrictions. For example there are now no rating bands into which each of the three boats must fall. Neither does one of three have to be a ‘big boat’. Equally, teams now no longer have to represent a nation or a region.

Simply put – any three boats of any size from any nation can form a team. They can represent the same nation, the same region, the same club or they can just be three boats from different countries, whose like-minded owners feel they can race as a competitive team.

Any three boats entered in the IRC Europeans can form a team. The only limitation on Commodores’ Cup entries is that their crew can only include one World Sailing Group 3 ‘professional’ whilst the number of pros is unlimited on IRC Europeans boats not competing in the Commodores’ Cup.

One of the strongest Commodores’ Cup teams is likely to be the British trio of Andrew McIrvine’s First 40 La Réponse, Ed Fishwick’s Sun Fast 3600 Redshift Reloaded and the JPK 1180 Sunrise, recently acquired by Tom Kneen.

The Commodores’ Cup in its present form dates from 1992 when the US team of Don Smith’s Falcon, Oliver Woodhouse Grin’s Collaboration and Peter Gordon’s Gaucho won.

RORC Admiral Andrew McIrvine explains: “The Commodores’ Cup remains the only team event in the world left for Corinthian sailors. It is a particularly intensive week of both inshore and offshore racing, which is unusual these days. It is a very tough competition, particularly between the UK and France. I am very much looking forward to this intensity.”