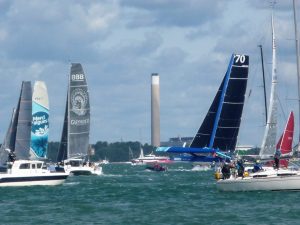 Crews taking part in this year’s Rolex Fastnet Race were gathering in Cowes during Lendy Cowes Week for the start of the 600+ mile race which departed from the RYS start line on Sunday 6th August.

Prior to the race the 2,700 crew members were busy with final preparations including, for some, a Press Conference and for all skippers a Briefing held in the RORC Club House, Cowes.

Answering questions from the press was skipper of CQS, the second largest boat, Ludde Ingvall who said he was looking forward to this race although he had competed in other Fastnet Races. 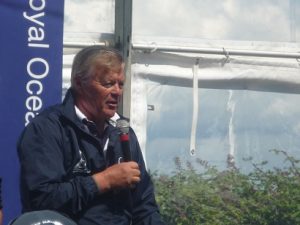 Also answering questions was seventeen-year-old Montel Fagan-Jordan who was about to compete in his first ever Fastnet. Montel is a student from Greig City Academy, Hornsey, London which has 1,200 students. He was one of seven students from Greig City preparing for the race in Cowes and has the added responsibility of being the crew captain and helmsman on board the school’s boat Scaramouche.

Montel said, ” Sailing is something different to what I’d normally do when you’re thinking about what sports you do in London, which is very landlocked. My friends back at college don’t completely understand what I do on the water, or why. Some are quite wary, some are quite supportive but I love the different experiences you can get from going sailing.” 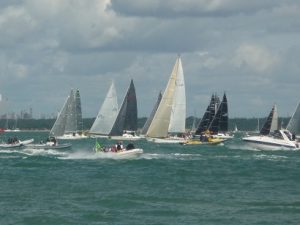 There were ideal conditions for the start of the Royal Ocean Racing Club’s Rolex Fastnet Race with brilliant sunshine and a brisk westerly wind gusting up to 20 knots. With a record-sized fleet of 368 boats, the first start got underway at 11:00 BST for nine multihulls. In a few minutes, Concise 10, had pulled into a lead and by the time the IRC One Class was starting at 12:20 Tony Lawson’s MOD 70, skippered by Ned Collier Wakefield, was already off Poole. Concise 10 took line honours in this year’s Round the Island Race in association with Cloudy Bay in a time of 2:22:23 but racing 600+ miles was somewhat different to the 50 odd miles of the Island’s coasts. 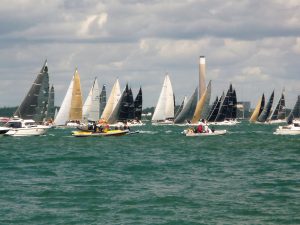 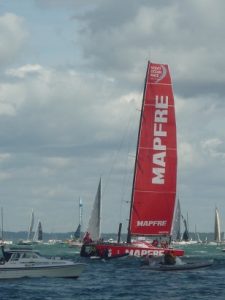 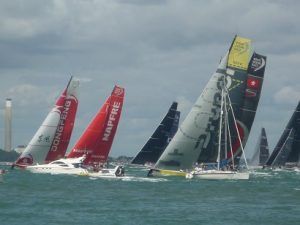 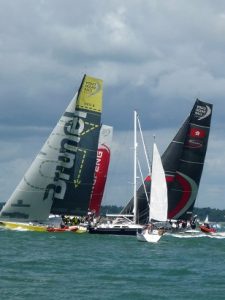 Overnight the fleet made solid progress upwind. At 9am Monday, Concise 10 was already off the Irish coast just about to tack towards the Fastnet Rock.

The next boat, leading monohull, George David’s Rambler 88, had rounded Land’s End and this was followed by SMA, the lead IMOCA 60, sailed doublehanded- by Paul Meilhat and Gwénolé Gahinet.

About this time most of the handicap fleets were attempting to make progress around Start Point but with some faster boats heading for the Isles of Scilly or Land’s End.

By 15:49:37 BST Monday, Concise 10 became the first boat to round the Fastnet Rock with the next boat in the race, Rambler 88, 111 miles astern. Behind them there was a battle between the VO65s competing on the Volvo Ocean Race’s Leg Zero with Team Akzonobel a mile ahead of Dongfeng Race Team.  However, these were still astern of SMA.

Overnight Tuesday/Wednesday some of the World’s most high profile ocean racing yachts arrived in Plymouth. Ludde Ingvall’s 100ft maxi CQS and Nikata, (at 115ft LOA, the longest yacht in the race) and the fleet of seven identical VO65s competing on Leg Zero of the 2017-18 Volvo Ocean Race. As expected, the Volvo Ocean Race fleet sailed as close a race as any leg of the event proper. During this race at least four of the seven boats led at various times and there were numerous lead changes. As expected, the two boats in the limelight were the Dongfeng Race Team and MAPFRE. The new Team, Akzonobel, came close to leading the VO65s around the Fastnet Rock, but were overtaken by Dongfeng Race Team. The seven VO65s all arrived within half an hour of each other with Dee Caffari’s Turn The Tide On Plastic bringing up the rear.

In an exceptional performance, arriving before all of these fully crewed heavyweights was the French two handed IMOCA 60. Paul Meilhat and Gwénolé Gahinet on SMA crossed the Plymouth finish line at 03:24:02 UTC.

Aside from the Volvo Ocean Race seven, another tight competition in the Rolex Fastnet Race was between the twenty six Class40s. These boats are designed to a box rule created in France in the early 2000s.On Wednesday afternoon the Class40 leaders arrived in Plymouth with victory going to V and B skippered by Frenchman Maxime Sorel arriving at 14:32 after 3 days 3 hours and 22 minutes at sea.

Overnight Wednesday/Thursday and through Thursday morning boats were streaming across the Rolex Fastnet Race finish line and into Plymouth Yacht Haven. These included boats in IRC1 and IRC 2 and by Thursday afternoon and evening and on into Friday the smaller boats in IRC3 and IRC4 and the Two Handed class were arriving. At 01.39.19 Friday morning, Scaramouche with the crew from Greig City Academy including eight students aged between 15 and 18, two teachers, two skippers and a team manager, crossed the finish line.

By the time of the prizegiving for a third time running the Rolex Fastnet Race has been a story of French domination with French boats taking the top spot in IRC 1, 2, 3 and 4, the Class40 and IMOCA 60, the Two Handed and IRC Overall. Even the Chinese boat, Dongfeng Race Team, winners of the Volvo 65 competition had a largely French crew. IRC Zero class went to American Ron O’Hanley’s Cookson 50 Privateer, while, surprisingly, the only British class victory went to Tony Lawson’s MOD 70 trimaran Concise 10, in the usually French-strong Multihull class! 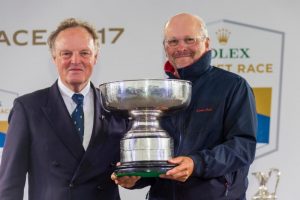 Lann Ael2 raced in Cowes last year in the RORC Commodore’s Cup. He was presented with the trophy by Michael Boyd Commodore of the RORC who had taken part in the race himself as skipper of Lisa – First 44.7 owned by Nick and Suzi Jones and placed 2nd in IRC2. Michael received the Joggernaut Trophy for ‘best Irish yacht’.

The final boat to finish the 2017 Rolex Fastnet Race, German Armin Kammer’s Samoa 48 Odysseus, was due into Plymouth on Saturday afternoon.