Friday headliners Stereophonics were making their third appearance at this year’s IW Festival, although frontman Kelly Jones revealed he had attended as a punter to see Tom Petty and Bruce Springsteen.

They kicked off their 85 minute slot with ‘C’Est la Vie’, ‘I Want To Get Lost With You’ and their initial hit ‘Local Boy in a Photograph’. Kelly remarked it was good to be back on the Isle of Wight.

Their sound was enhanced with strings for ‘Indian Summer’ ‘Graffiti on a Train’ and ‘Sunny’. On some songs Kelly swapped guitar for piano.

After thanking their fans for 20 odd year’s support, they finished with ‘Handbags and Gladrags,’ penned by Mike D Ako, ‘The Bartender and the Thief’ and closed with their Number 1 single ‘Dakota’. 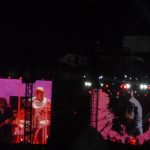 As The Who took the stage on Saturday night vocalist Roger Daltrey raised a mug of tea to toast the crowd. They soon launched into a two hour performance starting off with ‘Who Are You’ followed by ‘Can’t Explain’ and ‘Substitute’.

After a big US tour they were glad to be back in the UK and particularly at the IW Festival.

Their performance featured a review of  a career spanning fifty + years via a selection of hits and a video backdrop of notable events plus footage of their two films ‘Quadrophenia’ and ‘Tommy’.

In a grand finale The Who played the two synthesiser masterpieces ‘Baba O’Riley’ and ‘Won’t Get Fooled Again’ which bookend the ‘Who’s Next’ album.

Castle fields was used as the landing and takeoff site for their helicopter trips to and from the Island with each trip involving a convoy of cars to and from the Festival site at Seaclose Park. 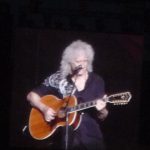 With what little rain there was having cleared and with an orange sun setting Queen appeared on stage at 8.56pm on Sunday night. They immediately launched into a high octane rendition of ‘One Vision’ followed by ‘Hammer to Fall’ and ‘Seven Seas of Rhye’, their initial hit single. 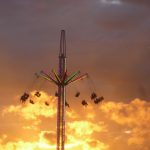 ‘Brighton Rock’ was a supreme example of Brian May’s virtuoso guitar work and this opening track from the ‘Sheer Heart Attack’ album segued into ‘Tie Your Mother Down’.

Queen’s two hour show climaxed with ‘Bohemian Rhapsody’. ‘Radio Ga Ga’ and ‘We Are The Champions’ and of course their rendition of ‘God Save The Queen’. Lasers lit the skies across Newport as the now, near capacity, crowd enjoyed both sound and light in a spectacular show. 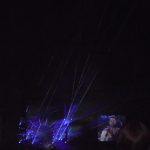 IW Festival 2016 closed with the now traditional pyrotechnic display which featured a musical soundtrack of ‘Heroes’ by the late David Bowie.

Away from the main stage a number of local businesses and charities had stands or bigger areas where festivalgoers could get a feel of what the Island has to offer. As popular as ever was the Kashmir Cafe staged by Quay Arts. Selling local beers and with IW talent amongst those on stage this venue has gained in popularity over the years. 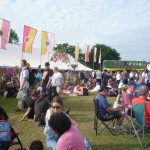 Charity stands included the Hampshire and IW Air Ambulance featuring a human helicopter, Earl Mountbatten Hospice selling the ever popular sunflowers and Dimbola showing photographs of the 1970 IW Festival at Afton as well as holding a silent auction. Brian Hinton MBE from Dimbola said how grateful he was to John Giddings for allowing them to hold the auction which raised over £1,000 for the charity which is based at Dimbola, Freshwater Bay. 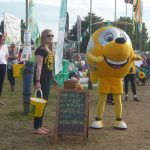 With the main charity of the IW Festival being ‘Stand Up To Cancer’ it was no surprise that this charity got some welcome support from the musicians of Carisbrooke College. Playing on the ‘Stand Up To Cancer’ beach for around an hour this local band, led by music teacher Ben Sampler was well received and whilst the band played children could enjoy the pleasures of sand castle building on this beach in a field on the banks of the River Medina! 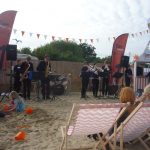