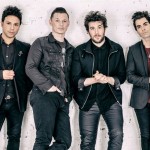 Originally known as Tragic Love Company the definitive Stereophonics were formed in 1992, although the nucleus of the band took shape between 1986 and 1991.
Initially a trio this Welsh Indie rock band consisted of founder members Kelly Jones (songwriter, vocalist and guitarist) bassist Richard Jones and drummer Stuart Cable. All three were born in Aberdare, Wales.
Stuart was sacked in 2003, over fears his burgeoning media career was taking over his life. He subsequently died aged 40 on 9th June 2010 following one of his many heavy drinking sessions. He was replaced by Javier Weyler, who left the band in 2012.
In March, 1997 they scored their first hit single with ‘Local Boy In A Photograph’. Six months later they had their initial Top Ten album with ‘Word Gets Around.’
Their first number one album in 1999 was ‘Performance and Cocktails’ with further chart toppers coming in 2001 and 2003. Three more followed in due course.
In early 2000 Stereophonics collaborated with fellow Welshman Tom Jones on ‘Mama Told Me Not To Come’ which reached the Top Ten. It was previously a hit for Three Dog Night three decades earlier.
Firstly a hit for Chris Farlowe in 1967 Stereophonics reworked ‘Handbags and Gladrags’ and took it to Number 4 in late 2001. Their first, and so far, only Number One single came in March 2005, courtesy of ‘Dakota’.
Today the band consists of original members Kelly Jones and Richard Jones with Jamie Morrison on drums and Adam Zindani on guitar. Additionally they have Tony Kirkham on keyboards when touring.
This will be the Stereophonics third (Hat-trick) appearance at Seaclose following previous visits in 2005 and 2009.
In 2009, when Saturday headliners at Seaclose, Stereophonics gave a 90 minute performance that left the crowd wanting more. Their encore featured an acoustic version of ‘Maybe Tomorrow’ before they signed off with a well received rendition of their sole Number 1 single ‘Dakota’.

Stereophonics and electronica dance legends Faithless are to co-headline on Friday 10th June.
Festival promoter John Giddings said: “We are delighted to welcome Stereophonics and Faithless back to The Isle of Wight Festival to co-headline the Friday night. Stereophonics continue to prove they are still on top with a new No. 1 album and they are absolutely brilliant live. Likewise Faithless, who are currently celebrating their 20th year, have had hit after hit, and I know the crowds at the festival are going to go crazy when they bring their live set up to the Friday night. Looking forward to catching their sets!”
A full range of ticket, travel and camping / accommodation options are available for The Isle of Wight Festival from www.isleofwightfestival.com.