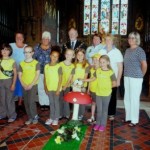 Some 95 years ago girls in Ryde were joining the Brownies. With Brownies nationally only formed in 1914 Island girls were quick off the mark to join in the fun and now 95 years later 1st Ryde Brownies are still going strong.
In the first years the registration saw them registered as 1st Ryde (All Saints) and the then Pack had an attachment to All Saints Church, Ryde. This registration still stands today and it was at All Saints Church and in the adjoining Church Hall that the celebrations took place.
Joining the Brownies and their Snowy Owl, Sharon Winter, for the celebrations were parents and friends as well as special guests Roi Milburn Mayor of Ryde, Shirley Saunders and Lesley Clifford (Island Commissioners) and previous Guiders with the Unit, Liz Tagart, Sandra Ferguson, Judith Day and Julie Jordan.
It was discovered that the four previous Guiders had undertaken over 100 years of service for Girlguiding between them and some continue to do so.

Leading the celebrations in the Church was the Rev. Canon Graham Morris and all the Brownies were quick to join in the activities led by Graham.
As part of the celebration two Brownies, Kanicia Merchat & Freya Bello-Baamonde made their Promise and following the church event everyone transferred to the church hall for songs and games, led by the previous Guiders, and tea. Scrapbooks, photographs and books recalling the 95 years were also shared. 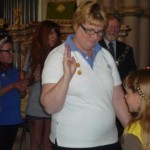 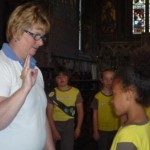 Sharon Winter said, “Joining Brownies is as popular now as it ever was. So many Brownies have been part of this unit over the years. Girls usually join Girlguiding when they are 5 as a Rainbow, then it is on to Brownies followed by Guides. Now there are so many activities Brownies can do- most come with a badge. It is so different to when 1st Ryde was formed when one of the Brownies’ first tasks in helping the community was to help others in getting over the aftermath of WW1”.

Recently the Brownies have been undertaking a ‘Good Turn’ to help the community by helping to purchase tiles for a refurbishment at All Saints Church. These tiles have been placed on a dais and it was on this that the new Brownies made their Promise. 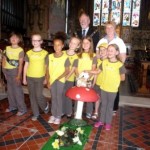 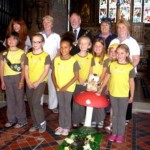 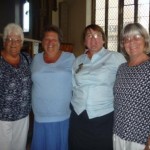