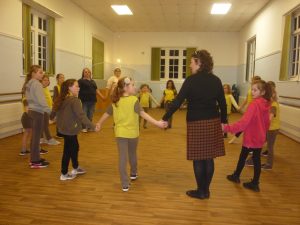 With Scottish Country Dancing and Cake what better way to celebrate Burns Night.

All the Brownies and leaders of the 1st Carisbrooke (Princess Beatrice’s Own) Brownie Unit recently enjoyed an evening of Scottish Country Dancing led by two members of the IW Caledonian Society.
Scottish music filled the hall and the girls were quick to pick up the steps and moves of the dances which were led by dance teacher Judy Valvona and Aileen. Judy also showed the Brownies Scottish items and explained who Robert (Rabbie) Burns was. One of the dances was entitled Rabbie’s Jig. 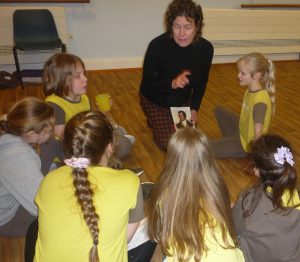 One of the Brownies Lily Kingsland (8) said, “Scottish Country Dancing is fun. I have done some dancing at school and this is very similar. I have really enjoyed this evening.”
Lily was responsible for making the cake which all the Brownies enjoyed following the dancing. Lily had undertaken her Bakers Badge and was pleased to share the recipe with the other Brownies. For this badge Lily had written a story based on an adventure with a colouring book with the cake therefore replicating the colours in the book. 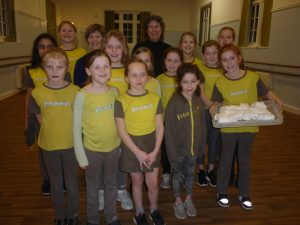 Brown Owl, Rachael Woodford presented Lily with her Bakers Badge and a second badge as Lily had raised £200 for a local charity.
For anyone wanting to follow in the Brownies footsteps and take up Scottish Country Dancing the IW Caledonian Society run dances at St. George’s School, Newport on Tuesday evenings. For more details contact them on 752402