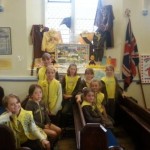 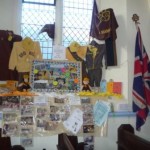 On the occasion of their 150th Anniversary, members of Shanklin Methodist Church staged a celebratory exhibition over the late Spring Bank Holiday weekend. Nine themes were chosen to illustrate a wide range of Shanklin life.

Until the 18th century Shanklin was mainly farmland and those who did not live or work on the land undertook fishing. With the railway coming in 1864 it heralded the start of tourism in the town.

4th Shanklin Brownies have met in Shanklin Methodist Church Hall for as long as anyone can remember. 2014 sees the Brownies-nationally- celebrating their centenary with Big Brownie Birthday events so it was only fitting that the Brownies undertook one of the Church displays.

Chronicling the changing styles of Brownie uniform over the years the display also included photos of past and recent trips and celebrations. These included the Islandwide Masked Ball and a PGL adventure weekend.

Until recently 4th Shanklin Guides also met in the Church Hall. To commemorate the Diamond Jubilee of Girlguiding in 1970 the unit presented a lectern to members of the Junior Church which is a permanent feature at the church.

At the front of the church was a model with preacher’s clothing as worn in the early days of Methodism. There were displays showing Baptism, weddings and funerals including a Victorian bridal gown.

Another permanent feature is the stained glass window which honours the centenary of Shanklin Methodist Church in 1964.

John and Charles Wesley are remembered as founding fathers of the Methodist movement by means of the Wesley Window. John was one of the most influential preachers while his brother became known for his hymns.

Following a failed missionary visit to America the two brothers returned to England. Subsequently, having been excluded from many Anglican churches they set up Methodist societies and chapels in many parts of Britain.

On 10th July, 1783 John Wesley landed at Cowes and walked to Newport, where he preached to many. Whilst on the Island he visited Carisbrooke Castle.

Other topics covered in the anniversary exhibition depicted both World Wars, a history of the Shanklin Methodist Societies , the Sunday School and Tourism.

Weekend events climaxed with two church services which saw the return of Chrissie Millwood who had previously been the minister at Shanklin. Chrissie is now based in Kent.