At Newport in 1959 and with the disbanding of the Salvation Army Life- Guards and Sunbeams, 11th Newport (Salvation Army) Guides and Brownies were registered. Their Brownie Pennant was dedicated on 20th September.
Over the years at 11th Newport a number of leaders have led the girls and now some of the Brownies of past years are the leaders. Although no longer attached to the Salvation Army the Brownies help Salvation Army good causes. During the Christmas period 2018 the Brownies made table decorations which were placed on the tables for the Christmas Day lunch which is served by volunteers to those in need.
To celebrate the Brownies 60 years a celebration party was held during a unit residential holiday at Sandown.
Marion, a former Brown Owl, went along with old photos, uniforms, and books. Some of the Brownies enjoyed trying the old uniforms. 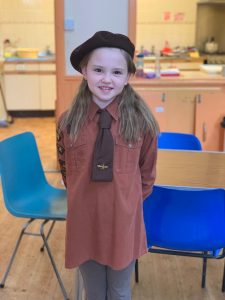 They also enjoyed looking through the books of photos and finding Clare the present Brown Owl and Fluffy Owl (Harriet), who had both been Brownies a few years ago, in the photos.

Everyone enjoyed cake and pink lemonade and sang Happy birthday to themselves. 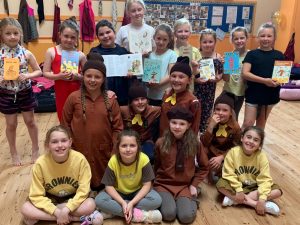