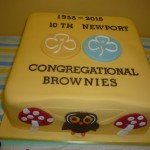 Back in 1955, on 18th June, a Girlguiding County rally was held at Carisbrooke Castle, with the then World Chief Guide, Olave, Lady Baden- Powell attending. Thousands of Guides, Brownies and Rangers attended. Whether it was hearing of this occasion or hearing of other Girlguiding activities on the Island we will never know but after this rally there was an increase in interest in Girlguiding and new units were formed.
One of these new units was 10th Newport (Congregational) Brownies. On 9th November 1955 there was much to celebrate within the Congregational Church community at Newport as the new Brownie Pack was registered at Girlguiding’s London HQ. 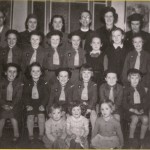 Girls had been attending weekly meetings since September of that year. Originally the pack met in the Queens Hall, Lugley Street (now the rear entrance to Boots) and the Congregational Hall which was then situated in the now former Beavis store on Upper St. James’ Street. Later, in the 1970s, the pack moved to a new Congregational Hall next to the church in Lower St. James’ Street. This Church is now Wetherspoon’s ‘The Man in the Moon’ public house and the former hall is now the pub’s kitchen area.
In 1955 there was a need, with heavy demand, for another Newport Brownie Pack even though there were already nine in the town. Accordingly this new pack was registered as 10th Newport (Congregational), a title which remains today.
As the girls progressed through their Girlguiding careers two new Guide units were formed in Newport and in 1959, on 22nd March, a special service was held at the Congregational Church when the new 10th Newport Guide Colours were dedicated.
When the Congregational Church moved premises the Brownies met in a former shop in Newport High Street before the new Congregational Church premises were built.

To celebrate the 60 years of 10th Newport Brownies a number of activities and parties have been arranged for the current Brownies by Brown Owl Felicity Harris and other leaders. 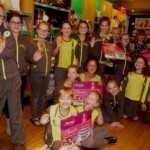 A visit to Thorntons was made in October when all the Brownies decorated chocolate plaques with different coloured icing. Designs included hearts, pumpkins and Santa for those able to keep their chocolate until Christmas.

On the actual Birthday-9th November- all the Brownies, their leaders and friends of the unit returned to their old home in St. James’ Street-the much altered church and hall, now ‘The Man in the Moon’ where they enjoyed a meal. What did the Brownies enjoy to eat? Chocolate Brownies of course! Managers of the Wetherspoon’s pub, James Ilott and Myles McNally were pleased to join the group for a photo and to learn the history of the Brownies meeting place. 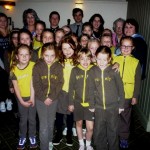 According to the Girlguiding IW archives the 1st Brown Owl in September 1955 was Mrs. Sheila Thompson who was the wife of the then Congregational minister the Rev. Arthur Thompson. She was assisted by E. Nicholls. By 1958 M.Wills had become Brown Owl but in April 1959 E.Nicholls moved up to this position and remained in post until September 1968 when Norma Godfrey took over as leader. The assistant leaders in the early 1970s were R. Walder and Dora Simpson and in April 1973 Dora Simpson became the leader. She had three consecutive assistants, Jean Sivier, Karen Draper and Felicity Blake who gained her warrant in May 1981. Just 13 months later in June 1982 Felicity Blake became Brown Owl, the position she still holds today, with Karen Draper remaining as an assistant until December 1982. When Felicity married Peter Harris, the Brownies and Guides formed a Guard of Honour. Later in the 1980s Wendy Binsley was an Assistant leader and Felicity was joined in November 1991 by Chris Lyons as an assistant. Other assistant leaders during the 2000s were Helen Snashall and Lilian Akers. Today, Felicity Harris is still enjoying her post as Brown Owl with 3 assistant leaders, Jennie Thompson and Lottie and Sarah Harris.
Several ex-members and friends of the pack joined the Brownies and their leaders for a games and dance packed birthday party as the culmination of the celebrations for the sixty years. With a 1955 theme the girls enjoyed Rock and Roll dancing led by Vicky Gilford from the Pegasus School of Dance. This activity was sponsored by the Sainsbury’s ‘Active Kids’ scheme. 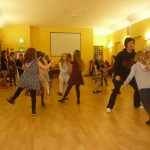 One of those attending the party, at which Felicity had arranged a slide show of the unit highlighting special activities over the years, was one of the original Brownies, Jean Tayler,(sic) who said that she loved being a Brownie and enjoyed helping younger girls when she was the ‘Sixer’(an older girl who looks after a small group) of the Elf Six.
Jean was invited to cut the special birthday cake with Felicity and the Brownie who had joined the unit most recently- Evie Kent-Bushell and she is just 7. 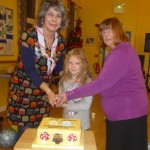 Other guests included the Section Commissioner for Farringford District, of which 10th Newport forms a part, Rachael Woods and the Congregational minister Mark Evans and his wife Denise.
During the sixty years special activities have included away-days on the Island and mainland, riding in an open-top bus to celebrate 100 years of Girlguiding in 2010 and out-door pursuits including tree climbing and visits to the beach. In 2014 10th Newport joined with the other Brownie units on the Island to celebrate the Big Brownie Birthday (100 years). That year commenced with a Masked Ball at Cowes, Picnic, games and a ride on the train at IW Steam Railway, Havenstreet and a Beach Fun Picnic with games and sandcastles at Appley Beach. 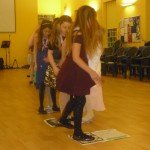 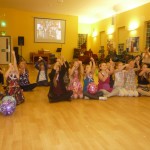 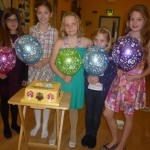