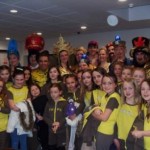 Registering the Brownie Pack came first in September of 1955 followed by the Guide Company in the November of that year.

So fast forward 60 years. Sadly the Guide Company was disbanded some time ago, the Congregational Church has moved its home to a new building in Pyle Street and the old church building is now The Man in the Moon, a Weatherspoon Pub/Restaurant.

However, the Brownies are still very much going strong and all the Brownies in the present unit are looking forward to celebrating the 60years anniversary.

To start the year the Brownies made a visit to a local pantomime where the girls met with the cast of Aladdin after they had enjoyed the production which was held at Medina Theatre in February.