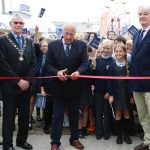 Fifty Year 5 pupils from Cowes based Lanesend Primary School and 50 from East Cowes based Queensgate Foundation Primary School learnt  about sailing by taking a tour of the visiting French Figaros and being  part of the official Race Village opening ceremony.

With talks from UKSA, the opportunity to try freeze dried race food, meet with the stage winner and British sailors, arts and crafts and a chance to go onboard one of the 39 racing boats docked in Cowes Yacht Haven, it was a fun filled and educational morning for the pupils.

As the competitors filed in across the finish line, representatives from event partners Destination Cowes, Visit Isle of Wight, Red Funnel and UKSA joined Her Majesty’s Lord-Lieutenant of the Isle of Wight, Major General Martin White in declaring the Solitaire Bompard Le Figaro Race Village officially open for a weekend of family fun.

On Saturday, the Red Funnel Food Show and cooking theatre, free skateboarding taster sessions and live Euro 2016 football on the big screen (1700pm and 2000pm) will all be added to the daily entertainment schedule.