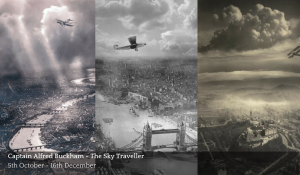 Dubbed the Sky Traveller a pioneering aerial photographer is the subject of the latest exhibition at Dimbola, Freshwater Bay and the gallery is delighted to host the first major retrospective exhibition of the work of Captain Alfred G Buckham.

Creating spectacular images in the face of technical and physical adversity the madcap daredevil Captain Alfred G Buckham (1879-1956) was the foremost aerial photographer of his day. Between 1908 to the early 1930s Buckham risked life and limb to create aerial portraits that are awe-inspiring, poetic and works of technical brilliance.

Alfred Buckham was courageous, almost recklessly so, insecurely squeezed with his large plate camera into a flimsy aircraft taking photographs nobody before had even dared. He survived nine crashes but the last crash he endured left him virtually speechless.

At the opening of the exhibition his grandson Richard Buckham, who had travelled to the Island for the event and who was born a year after his grandfather’s death, spoke of his grandfather’s bravery and explained some of Alfred’s techniques. 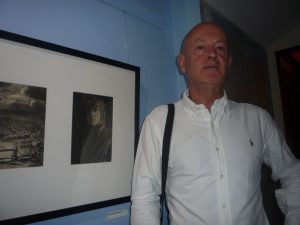 Richard Buckham alongside a photo of his grandfather.

Examples of the photographs include the Forth Bridge, Oxford, Durham, Windsor Castle and Guanabara Bay/Sugar Loaf in Rio de Janeiro, Brazil.

Alfred Buckham was a one-off. His first ambition was to be a painter but after seeing an exhibition by Turner he went home and burnt his own work. Those painter yearnings however did not go up in smoke and they found expression in his aerial photography. During World War 1 he was the first head of aerial reconnaissance for the Royal Navy and later made Captain in the Royal Naval Air Service. However, by 1919 he was discharged as one hundred percent disabled, the result of his nine crashes that left him breathing through a tube in his neck for the rest of his life – but did that stop him soaring to dizzying heights risking loss of consciousness to capture spectacular images with his unwieldly large format camera. 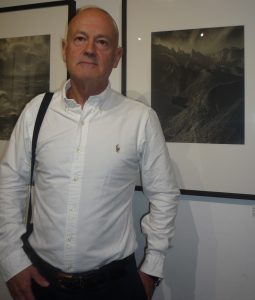 Richard Buckham with his favourite image taken by his grandfather.

This exhibition runs until 16th December 2018.